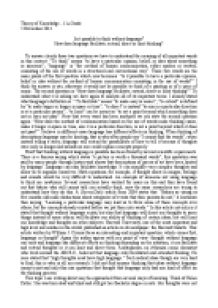 Is it possible to think without language? How does language facilitate, extend, direct or limit thinking?

a particular language may lead us to favor some of these concepts over others, but the concepts already existed before we put them into words.? In this article not only is it stated that thought without language exists, but also that language will direct our thoughts to some things instead of some others, will facilitate our ability of thinking of certain ideas, but will limit our knowledge and thoughts on other subjects. Harvard University, one of the most important and high level universities in the world, published an article on its newspaper: the Harvard Gazette. This article written by William J. Cromie faces an interesting and important question: which comes first, language or thought? Again the author agrees with my point of view: thought without language can exist and language has different effects on thinking depending on the situation, it can facilitate and extend thoughts or it can limit and direct them. Aristophanes, an Athenian comic dramatist who lived around the 400 B.C., believed that language only facilitated and extended thinking. He once stated that ?high thoughts must have high language.? Such radical ideas though are very hard to find, this is why in all my research I did not find anyone thinking ...read more.

Children who still did not learn any language will notice both the position of spoon and the towel with respect to each other and if they are held tightly or loosely. After several studies researchers have found the language which can better extend the thinking process because of its broad vocabulary: it?s German. This again shows that language may affect thoughts in several ways. The two questions posed at the beginning of this study were if thought may exist without language and if language affects the thinking process. While proving my point of view throughout the essay, I showed that thinking without language is possible and that language has several different effects on thoughts. For example language will limit the possibility of describing A marvelous landscape, but it will give a greater sense of organization in thoughts facilitating the connection between them. May be in the future parents will treat their children differently knowing how their babies think while they still look like they do not understand. Fortunately researchers are still learning new things on how the thinking process works, with and without the use of language. ...read more.