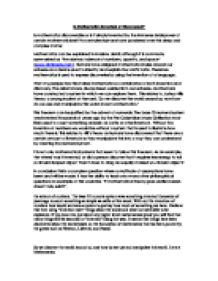 Is mathematics invented or discovered?

Is Mathematics Invented or Discovered? Is mathematics discoverable or is it simply invented by the immense brainpower of certain mathematicians? For centuries humans have pondered over this deep and complex matter. Mathematics can be explained in massive detail, although it is commonly summarized as "the abstract science of numbers, quantity, and space" (www.dictionary.com). Humans have assigned mathematical rules around our universe as a device used to identify and explain the void's truths. Therefore mathematics is used to express discoveries by using the invention of a language. From my perspective this makes mathematics a combination of both invention and discovery. ...read more.

Without the invention of numbers we would be without a system that is used to illustrate how much there is. This relates to Hill's theory as humans have discovered that there are a certain amount of livestock so they manipulate this into a way they can understand by creating the numeral system. It is not only mathematical systems that seem to follow this theorem. As an example, the wheel; was it invented, or did a person discover that it requires less energy to roll a circular shaped object than it does to drag an equally massed un-circular object? In conclusion this is a complex question where a multitude of assumptions have been and will be made. ...read more.

I believe that then using "invented math" things about the world and what not were able to be explained. If you look into just about any higher level mathematical proof you will find that many things will be assumed or "invented" along the way. It seems that things have been discovered about the world based on the foundation of mathematics that has been poured by the greats such as Newton, Liebtniz, and Pascal. So we discover the world around us, now how do we use and manipulate this world. Invent Mathematics. Mathematics clearly involves the invention of a language to express discoveries (or assist in making those discoveries). For example, was the wheel "invented", or did someone discover that rolling a circularly shaped object requires less energy than dragging an equally massive object? ...read more.