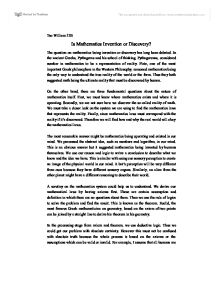 Is Mathematics Invention or Discovery?

Tso William 12B Is Mathematics Invention or Discovery? The question on mathematics being invention or discovery has long been debated. In the ancient Greeks, Pythagoras and his school of thinking, Pythagoreans, considered number in mathematics to be a representation of reality. Plato, one of the most important Greek philosophers in the Western Philosophy, reasoned mathematics being the only way to understand the true reality of the world or the form. Thus they both suggested math being the ultimate reality that must be discovered by human. On the other hand, there are three fundamental questions about the nature of mathematics itself. First, we must know where mathematics exists and where it is operating. Secondly, we are not sure how we discover the so-called reality of math. We must take a closer look on the system we are using to find the mathematics laws that represents the reality. Finally, since mathematics laws must correspond with the reality if it's discovered. Therefore we will find how and why the real world will obey the mathematical laws. The most reasonable answer might be mathematics being operating and existed in our mind. We processed the abstract idea, such as numbers and logarithm, in our mind. This is an obvious answer but it suggested mathematics being invented by humans themselves. We use our reason and logic to arrive a conclusion to describe what we know and the idea we have. ...read more.

Therefore this sometimes leads to theorems that are bizarre and not likely to present the reality. One of the most noted example is the Banach-Tarski paradox. A sphere in the size of a tennis ball is split into many little pieces. Without changing their size, they could be re-arranged into another sphere in the size of the earth. This conclusion is odd and hard to accept. However this is derived from the obvious axioms in mathematics. Sometimes obvious axioms could even lead to contradicting theorem. A German mathematicians David Hilbert started to search a theorem that could prove if a theorem is true or false in a axiomatic system. Thus he wants to find a step-by-step recipe which could simplify the whole process of theorem from the beginning of the first axioms. On the other hand, another mathematician G�del derived two theorems. They stated that there will always be mathematical theorems which are true. However they are impossible to be proven right or wrong from the beginning of the axioms. However the axioms in which mathematicians chose are supposed to be true and self-evident. Their consequences still lead to a range of different results. If mathematics discovers the reality of the physical world, this world of nature will be in contradictory. Since there are paradoxes in mathematics, this world is in constant conflict between different theorems. Furthermore, mathematic is also a creative art like other so-called uncertain subject. ...read more.

We then use these axioms to derive more complicated theorem to describe the world. In other words, we create mathematic to describe the physical world that allows us to make the world more meaningful. On the other hand, the patterns we have created from the observation could be after all what we discover in the nature. Thus those patterns are in fact the reality of the physical world. Thus axioms will then be the reality also. Therefore we have discovered the mathematics in the nature. Physic laws, such as Newton's second law rely heavily on mathematics and they correctly predict the result. However, the process of finding scientific truth is based on falsification by peer-review. Also numerous and differed experiments are done to confirm the effect and the theories. Wrong theories, such as phrenology, were discarded. Thus the role of mathematic must not be exaggerated in finding truth in science. For example, Newton's famous three laws were later all experimented by other scientists in later times before they are accepted being truth in describe the motion. If the mathematical theorem could not be applied to the nature, then it could not be discovered. Since the mathematical laws should be hidden in the nature in which human discover. Thus we are invited to observe the chess player playing the chess but we are not told what the rules are. However the rules are contradictory. Thus by observing the nature, human used axioms to deduce theorem that are possible to describe the nature. Therefore mathematic is invented by people to describe the world. ...read more.