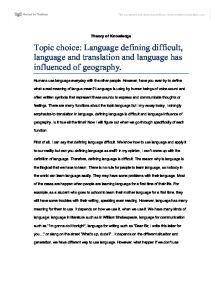 Language defining difficult, language and translation and language has influenced of geography.

Theory of Knowledge Topic choice: Language defining difficult, language and translation and language has influenced of geography. Humans use language everyday with the other people. However, have you ever try to define what a real meaning of langue mean? Language is using by human beings of voice sound and often written symbols that represent these sounds to express and communicate thoughts or feelings. There are many functions about the topic language but I my essay today, I strongly emphasize to translation in language, defining language is difficult and language influence of geography. Is it true all the time? Now I will figure out when we go through specifically of each function. First of all, I can say that defining language difficult. We know how to use language and apply it to our reality but can you defining language as well? In my opinion, I can't come up with the definition of language. Therefore, defining language is difficult. The reason why is language is the illogical that we have to learn. There is no rule for people to learn language, so nobody in the world can learn language easily. ...read more.

This is not suitable for older generation, especially with our parents. . From 2 examples above show us language is difficult in our real life. The person who knows language very well is not sure that he uses in the right time. Now I can confirm that defining language is not easy like most of people thought. Secondly, language is also affected in translation. We know that translation in language is one of the ways to learn foreign language easily. However, there are some issues that appear when we translate to our language. The reason why is because each language has their own meaning or defining in their own word and it leads to misunderstanding the word or doesn't understand the word totally. It is good when we lose the originally meaning of the word but we still understand. What happens if we lose the meaning of the word through translation? Is language still truth? In my opinion, I think when we lose the meaning of the word; the language is not still truth anymore because each word has an own meaning to represent the word. ...read more.

I think in most of the time, deductive logic can be used when language had influenced of geography. For example, China is one of the largest countries in the world and they also have a lot of specific areas that language has influenced by geography. They use different language to communicate with other people. In Hong Kong, we have Mandarin, in China we have Cantonese, and in Shanghai they also have their own language. It leads to doesn't understand each other very well and cause to misunderstanding between human and human. Another example that I think it can fit with the argument above is in tropical country, we have a word durian-tree and jack-tree but when we go to Western country or United State, some area that they do not know what it means actually or they have never seen it before. To sum up, language can affect to translation, geography and also language is defining is difficult. Most of the reason is because these functions lead to misunderstanding between people and people most of the time. Having a language to communicate with other people, language is unique for human, so we should figure out and find a good way to connect different language in different area or country together in order to no mistake also no misunderstanding in language. ...read more.