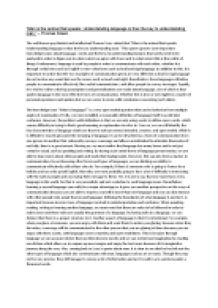 Man Is the animal that speaks, Understanding language is thus the key to understanding man

This is because through language we can account stories that can then become novels and we can extend our imagination by reading non-fiction which allows us to conjure up new images and enjoy the text more because of its imaginative journey along the way. Also, coming back to Szasz?s quote about man, it is clear to see that he has left out the other types of language which also communicate with man, languages such as art or music. Though they may not be very precise, they still manage to convey a lot of information and as it is said in art, a picture paints a thousand words. Another knowledge issue that arises from Thomas Szasz?s quote is ?To what extent do words help us understand language?? Words play an important part in helping us understand language as we mostly read, write speak and listen when it comes to use of language. It is also clear that through words, we create sentences and through sentences we communicate large amounts of information to the other party. For example, if there is a floor sign that says the word ?dangerous?, it does not convey much on its own, but when it is put together in a sentence such as ?this area of flooring is dangerous? it makes a lot more sense as we now know where there is danger and have understood the message being conveyed. ...read more.

However, leaving behind the imperfections of language as a key to understanding man, a point to appreciate is that spoken language is only limited to human beings and is not available to other animals. Therefore we must not take verbal communication for granted as we don?t always see its importance because of how naturally we incorporate it into our everyday lives. In addition to this, a common assumption linked with this knowledge issue is that verbal language is the first and last way of understanding man. This is not the case as verbal communication solely on its own cannot accomplish nearly as much as what other forms of communication combined with it can. All in all, the quote by Thomas Szasz appears to be true, but only to some extent. This is so because it is important to realise that though language may play a big part in understanding man, it is not the only way to understand him and that other forms of communication can sometimes prove to be more valuable. Thus, it is now evident that language, words and understanding are vital in order to communicate with people and that sometimes other forms such as body language and art have the ability to convey more of a message than our words could ever manage. ...read more.