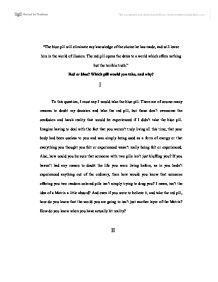 "The blue pill will eliminate any knowledge of the choice he has made, and will leave him in the world of illusion. The red pill opens the dates to a world which offers nothing but the terrible truth." Red or blue? Which pill would you take, and why? I To this question, I must say I would take the blue pill. There are of course many reasons to doubt my decision and take the red pill, but those don't overcome the confusion and harsh reality that would be experienced if I didn't take the blue pill. Imagine having to deal with the fact that you weren't truly living all this time, that your body had been useless to you and was simply being used as a form of energy or that everything you thought you felt or experienced wasn't really being felt or experienced. Also, how could you be sure that someone with two pills isn't just bluffing you? If you haven't had any reason to doubt the life you were living before, as in you hadn't experienced anything out of the ordinary, then how would you know that someone offering you two random colored pills isn't simply trying to drug you? I mean, isn't the idea of a Matrix a little absurd? And even if you were to believe it, and take the red pill, how do you know that the world you are going to isn't just another layer of the Matrix? ...read more.

They wouldn't be able to live in a world where they weren't actually loving or caring or smiling. They may feel they have been living a lie their entire life and feel it time to face the truth, no matter how callous it may be as it is their "true" life. They would argue that being in a pod isn't the way a human should live and that we shouldn't be controlled in a Matrix and should take advantage of the opportunity to be free, because in the end, it is out duty to fight and save the human race. Julia Driver said: "one's experiences fail to reflect reality", and many would argue that this is true in the Matrix as there would never be any true gains or successes as your body isn't actually doing anything. You haven't really worked for anything and can't feel the full satisfaction felt after overcoming something. In the same way, you couldn't do anything wrong in a situation where you aren't actually doing anything. I mean, your body is in a vat, so you aren't technically doing anything; you are being programmed do something but that isn't really you. People may say this isn't the way they want to live, they want their actions to have importance and to be real, they want to be sure they are loved instead of wondering if the person has been programmed to love them. ...read more.

James Pryor asked: "Who is the Matrix supposed to be bad for?" which is very important, as I don't think it is bad for the ordinary people who haven't had any contact with the "real world". Since they don't have anything to compare it to or don't even doubt it, then there is no reason for it to be bad for them. Of course, without sounding like a relativist, what is good for some may not be good for others as the people that have unplugged don't see it as good anymore as they are in battle with the Agents. It depends greatly on whether you know of the alternate "real world" or not and if you prefer living in truth and freedom, even if it is a grimmer lifestyle. I mean, we could be in the Matrix right now and I don't think it is a bad life. I mean I believe it is the real world, but what if it wasn't, what if I was in the dream world? Then, to me, it isn't a bad one as I haven't experienced any agents trying to kill me, I have felt love and I have experienced successes and losses. Even if my body was in vat and this was a dream world, I wouldn't know anything otherwise so I can stay content in the dream world. I believe it is reality and that all I have felt is genuine so in my eyes, it isn't a bad world at all, dream or real. ?? ?? ?? ?? ...read more.