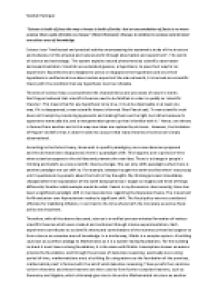 Science and an accumulation of facts -TOK essay

ï»¿Vaishali Harirajan “Science is built of facts the way a house is built of bricks: but an accumulation of facts is no more science than a pile of bricks is a house” (Henri Poincaré). Discuss in relation to science and at least one other area of knowledge. Science is an “intellectual and practical activity encompassing the systematic study of the structure and behaviour of the physical and natural world through observation and experiment”- The world of science and technology. The system explains natural phenomena by scientific observation and experimentation. Scientists use educated guesses, a hypothesis, to pave their way for an experiment. Experiments are designed to prove or disapprove the hypothesis and once their hypothesis is verified and true about certain aspects of the natural world, it is termed as a scientific theory with the condition that any hypothesis must be refutable. Theories of science help us comprehend the characteristics and processes of nature’s events. ...read more.

The movement for Monetarism over Keynesianism marked a significant shift. The fiscal policy was not considered effective for stabilizing inflation, in contrast to the time where both the monetary as well as fiscal policy was important. Therefore, with all the above discussed, science is a verified process-oriented formation of various scientific theories which were created and combined through intense experimentation. Each experiment contributes to a scientific theory and combinations of the numerous theories burgeon to form science as a massive area of knowledge. In a similar way, Maths is a complex system. A building could act as a perfect analogy to Mathematics as it is a system having foundations. For the building to stand it must have a strong foundation; it is the same with Maths. Assumptions known as axioms provide the foundation, and through the process of deductive reasoning, eventually over a long period of time, mathematicians e***t a building. ...read more.

Euclid, 2300 years ago, identified the first known set of axioms which were called as postulates. These formed Euclidean geometry; they had no formal proof and were derived from experience. It was considered true for over 2100 years by the coherence test for truth as well as the correspondence test for truth; however, it turned out to be that the fifth axiom formed was wrong. This shook the very foundation of the system and paved way for the non-Euclidean geometries of Nikolai Lobachevsky. This changed the foundation of geometry and caused a shift in people?s way of thinking as most people blindly believed in the Euclidean geometry, almost a paradigm shift in the world of Mathematics. Hence, an accumulation of theories do not necessarily need to be true as the basis of the structure is not verifiable. I strongly believe that science and maths are areas of knowledge that exist because of strong foundations. However, there may be flaws that could cause the structure to tremble but these are just paradigm shifts that could get the structure back to being strong with justified reasoning. ...read more.