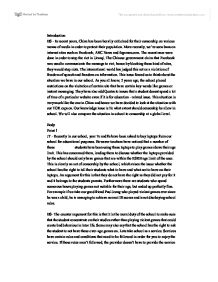 Speech. Our knowledge issue is To what extent should censorship be allow in school. We will also compare the situation in school to censorship at a global level.

Introduction HS - In recent years, China has been heavily criticized for their censorship on various means of media in order to protect their population. More recently, we've seen bans on internet sites such as Facebook, ABC News and ibgames.com. The recent ones were done in order to stop the riot in Uranqi. The Chinese government claim that Facebook was used to communicate the message to riot, hence by blocking these kind of sites, they would stop riots. The international world has judged this act as a violation of freedom of speech and freedom on information. This issue forced us to think about the situation we have in our school. As you all know, 2 years ago, the school placed restrictions on the visitation of certain site that have certain key words like games or instant messaging. They have also add Quotas to insure that a student doesnt spend a lot of time of a particular website even if it is for education - related issue. This situation is very much like the one in China and hence we have decided to look at the situation with our TOK caps on. Our knowledge issue is To what extent should censorship be allow in school. ...read more.

If you do this, without the permission of Microsoft then Microsoft has the rights to discontinue their services without any notice. In this situation, the condition is that students, who want to study in KGV, must have laptops and the games on their laptops must be within their age limit. In this scenario we believe that censorship should be allowed. It is ethically correct as the teachers are only trying to prevent the students from going in the wrong way. Additionally children at their age need guidance as they are not fully aware of the consequences of what they are doing. Point 2 JT - As mentioned earlier, the school has restricted the visitation of certain sites that have certain key words. This is definitely an act of censorship as it is denying pieces of information, which is very similar to the one that China has been criticized for. We believe that the censorship on school computers is an effective way of making sure that the students are going in the right direction and have the right attitude in school. The quote "Fear of corrupting the mind of the younger generation is the loftiest of cowardice." ...read more.

So, if there was to be a universal Freedom of Speech law, it would have to happens should all participating countries get together and make an international law and have a body that governs it. Is this even possible? If not, Does it follow the law of the country with the most user, if that is the case it is China. Or should is US? Is UK? Conclusion In conclusion, we believe that its the censorship in our school is a rational option that has to be taken for making sure that students of KGV are going in the right way. However we personally believe that the school should look into more topics to help the students paint the whole picture. This is our belief. There are lots of other views. JT : The Teleologist Approach for this issue would be to look at the advantages and consequences of censorship and come with a result that restrictions to visit certain Internet site and having a no games policy in school is logical however they may come to a result that having a restricted view on history is not acceptable. On the other hand a deontologist, will just look at the ethical side of the argument and will probably support going against the censorship. ...read more.