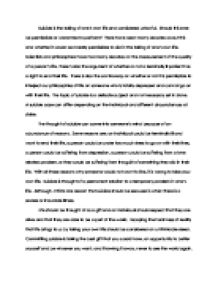 Suicide is the taking of ones own life and considered unlawful. Should this ever be permissible or warranted to perform?

Suicide is the taking of one's own life and considered unlawful. Should this ever be permissible or warranted to perform? There have been many debates about this and whether it would be morally permissible to aid in the taking of one's own life. Scientists and philosophers have had many debates on the measurement of the quality of a person's life. There's also the argument of whether or not a terminally ill patient has a right to end their life. There is also the controversy on whether or not it is permissible to interject our philosophies of life on someone who is totally depressed and cannot go on with their life. The topic of suicide is a delicate subject and not necessary set in stone. A suicide case can differ depending on the individual and different circumstances at stake. The thought of suicide can come into someone's mind because of an abundance of reasons. Some reasons are; an individual could be terminally ill and want to end their life, a person could be under too much stress to go on with their lives, a person could be suffering from depression, ...read more.

It's hurting the people that surround that person's life. It could be family members, a wife, a girlfriend, children, friends, colleagues, and anyone that had an impact on your life. The people that surround an individual that commit suicide will have to go on with the rest of their life with that thought in their mind. It's hard on them the most coping with the loss of a loved one that would end their life, not the person that commits suicide and escapes their life not knowing how it will affect them. They could also start to blame themselves that a person that committed suicide was their fault. Thoughts that they could have done something to prevent it and get a person help would arise. Physician assisted suicide and ending one's life from suffering from a terminal illness is considered excusable in some cases. A patient that is hurting from an illness that is going to eventually kill them anyway could be an easier death than slowly suffering and dying in the end eventually. ...read more.

While watching the movie, it seemed to me that David did not want to go through with Jack's "undead" wishes. It looked like he was finally happy with his life again after the tragic accident with the werewolf. I don't think he was comfortable with being a werewolf and dealing with that for the rest of his life, other than that he was happy. I would have liked to see how David would cope with the problem further in the movie. Seeing him die by getting shot from the police when he turned into the werewolf was a disappointment. Although, I think it was a better solution than him taking his own life and actually committing suicide. I think that in time it will be easier on Alex knowing that he didn't commit suicide. Her knowing that he valued his life enough not to kill himself is better solution in the end. Life should not be taken granted for and suicide is not the way out of a problem, not matter how severe or painstaking it may be. If a person is considering suicide they should get help immediately, or the individuals that surround a person should help them recover from whatever problem they are going through. ...read more.