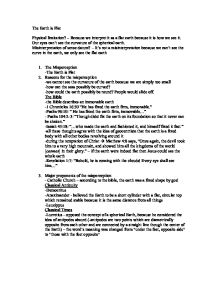 The Earth is Flat

The Earth is Flat Physical limitation? - Because we interpret it as a flat earth because it is how we see it. Our eyes can't see the curvature of the spherical earth. Misinterpretation of sense datum? - It's not a misinterpretation because we can't see the curve in the earth, we only see the flat earth 1. The Misperception -The Earth is Flat 2. Reasons for the misperception -we cannot see the curvature of the earth because we are simply too small -how can the seas possibly be curved? -how could the earth possibly be round? People would slide off. The Bible -the Bible describes an immovable earth -1 Chronicles 16:30 "He has fixed the earth firm, immovable." -Psalm 96:10: " He has fixed the earth firm, immovable..." - Psalm 104:2-3: "Though didst fix the earth on its foundation so that it never can be shaken." ...read more.

distance from all things -Leucippus Classical Times -Lucretius - opposed the concept of a spherical Earth, because he considered the idea of antipodes absurd (-antipodes are two points which are diametrically opposite from each other and are connected by a straight line though the center of the Earth) - the word's meaning was changed from "under the feet, opposite side" to "those with the feet opposite" 4. Implications of the misperceptions (how it affected life) - I have no clue what to say here. 5. Reasons why our perception has changed -Columbus didn't fall off the side of the Earth Logical Reasons Today -we've seen the Earth, mathematically can prove it -we're circumnavigated the earth and reached the same twice while going in the same direction while not falling off and therefore the earth is a continual shape with no corners or edges to fall off of ...read more.

<-- only possible if their horizon is at an angle to the northerner's horizon -also, noted border of Earth's shadow on Moon during partial phases as always being circular, no matter the height of the Moon over the horizon (only spheres cast circular shadow's in every direction whereas circular disks cast elliptical shadows in all directions apart from directly above and below -Euclid -Aristarchus -Ptolomy - Saint Augustine argued against the possibility of antipodes because of the Church's belief of a unified human race descended from one couple and redeemed by Jesus Christ; he doubted their existence because these peoples would have had to be descended from Adam and then travel to the other side of the earth by some means that had not been historically documented 7. Implications of the "corrected" perception- - navigation - less fear - more travel - cultural diffusion because people traveled around the world - discovery, pillaging, defacing, ...read more.