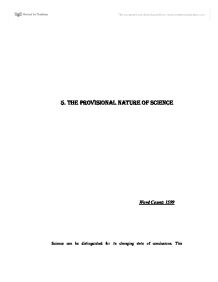 The Provisional Nature of Science

5. The provisional nature of science Word Count: 1599 Science can be distinguished for its changing state of conclusions. This provisional way of knowing can be very problematic even though it can be useful to us. Science is defined by the Webster's dictionary as "knowledge gained by systematic experimentation and analysis." (Webster's English Dictionary 253) What really distinguishes the sciences from many of the other ways of knowing is that it has a very different way to find the "truth." The definition of truth in this case is anything that works in practice or is useful to us because science is heavily based on the pragmatic theory. From discipline to discipline the ways of finding out the "truth" differ. However, even though science is a provisional human activity, it is not the only one. This can be seen clearly when one compares three different fields of study in terms of provisional conclusions: science, mathematics and art. Science is a system where "truth" is proven through experimentation and observation. It is thus a priori knowledge, meaning that it is knowledge that is derived from experience. While some people would argue that science is based on too many assumptions, and the laws always change, therefore, we should use other ways of knowing such as our perception, others would think of the usefulness that science brings. ...read more.

For instance, if a scientist is trying to find a cure for cancer, but instead randomly finds out how a person's brain works, he still furthers our knowledge of all the things around us, even though that scientist was hoping to find a different answer. This usefulness always reshapes our knowledge since it brings in new ideas and models that attempt to explain the patterns that are all around us. Unlike science, math is a static subject. Over hundreds of years we have used the same formulas, the only difference between the modern times and thousands of years ago is that math today is more complex. The definition of math is "the science dealing with quantities, forms, space, etc and their relationships by the use of numbers and symbols." (Webster's English Dictionary 176) This is an excellent definition, however; one should think of math not as a science, but rather as a subject or a field. Many years ago, mathematicians came up with functions such as multiplication, addition, division, etc. These functions are still useful since we have the chance to substitute symbols to represent the patterns around us. The symbols might change, but the expressions will always stay the same. For example, in the early stages, mathematicians used Greek symbols for the numbers that we have today; however, equations that they came up with are the same if we compare them with ours. ...read more.

Generally, in art conclusions are based on the frames of reference of the person that is evaluating the art piece. Thus, art is provisional in nature because even one painting might have different conclusions based on it. By comparing math, science, and art one can see that the knowledge gained from the sciences change; however, it is not the only subject that is provisional, that is shown through subjects such as art. Even one art piece can have many conclusions associated with it. So, in my opinion, the statement "what separates science from all other human activities is its belief in the provisional nature of all conclusions" (Michael Shermer, www.edge.com) is only partly true since science is provisional; however, that doesn't separate it from all other human activities. Math is an example of a static subject whereas, science is a subject open to debates and updates. We might think that sciences are not important to us since what we know now as the "truth" always changes; however, we must understand that a person who is confident that he knows everything will never learn. Through science we accept that our knowledge is limited, and we strive to improve what we already have. Without science, one may argue, we would never achieve the advancements that we are fortunate to have today. ...read more.