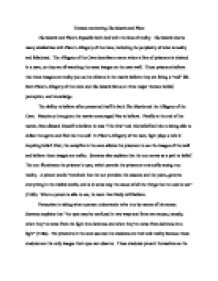 Socrates explains that "the eyes may be confused in two ways and from two causes, namely, when they've come from the light into darkness and when they've come from darkness into light" (518a). The prisoners in the cave assume the shadows are their sole reality because those shadows are the only images their eyes can observe. These shadows present themselves as the only real existences in the prisoner's life, so the prisoners believe these shadows to be the extent of reality. The matrix parallels this idea because like the prisoners, all the citizens in the matrix are plugged into another world where the citizens assume everything they touch, taste, see, and hear is actuality. Only when Neo becomes unplugged from the matrix does he begin to experience actual reality like opening his eyes for the first time and being able to perceive. ...read more.

He betrayed his team in order to have his knowledge taken away from him because the reality was too much for him to handle. Belief, perception and knowledge encompass both the Allegory of the Cave and The Matrix. Without one of these themes, a vital component would be lost in the story and neither the Allegory of the Cave nor The Matrix would be entirely explained. All three of these themes work with each other to allow a person to fully understand himself. Perception allows for a stronger belief because what a person can see and touch he is more likely to believe it is reality. But on the contrary, knowledge becomes the most important trait in order to grasp reality. A person needs to be educated on what he perceives and believes. Most of the time the obvious is not always right and that is why a person needs to use knowledge to decipher between what is reality and what is just fantasy. ...read more.