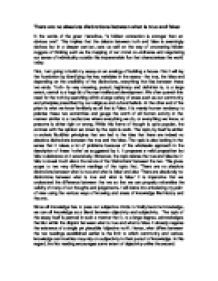 There are no absolute distinctions between what is true and false. Discuss.

There are no absolute distinctions between what is true and false: In the words of the great Heraclitus, ''a hidden connection is stronger than an obvious one''. This implies that the debate between truth and false is seemingly obvious but in a deeper context, sets us well on the way of uncovering hidden nuggets of thinking such as the mapping of our moral co-ordinates and negotiating our sense of individuality outside this impenetrable flux that characterises the world today. First, I am going to build my essay on an analogy of building a house. First I will lay the foundation by identifying the key variables in the essay- the true, the false and depending on the credibility of the distinctions, everything that lies between these two ends. Truth- its very meaning, pursuit, legitimacy and definition is, to a large extent, central to a huge bit of human intellectual development. We often quench this need for the truth by searching within a large variety of areas such as our community and principles prescribed by our religious and cultural beliefs. At the other end of the prism is what we know familiarly as all that is False. It is merely human tendency to polarise these two extremities and gauge the worth of all human activity in the manner similar to a touchstone where everything we do, or everything we know, or presume is either right or wrong. ...read more.

This assumption is critical to our conceptualisation of knowledge, as it is fundamentally this objectivity of truth that heightens the pursuit of knowledge; we can only acknowledge certain truths under the pretext that they conform to various prescribed standards. With one wall set up firmly, we move on to the next reading of the topic: 'there are no absolute distinctions between what is true and what is false'. Though this may not be as extreme as the previous reading, it still fails to delineate a way to distinguish between true and false. However, despite all its drawbacks, this topic is more appreciative of the possible implications of an objective truth. These eternal truths have not been chanced upon but rather have been settled upon after millennia of debate and reconsideration. In this scenario, we are comforted with the assurance that we may dispel fears long enough to act in a particular response by virtue of the 'universality' of the truth and knowledge being pursued. Moreover, the existence of an objective truth gives credence to the fact that some truths are preferred because they are the cumulative result of many generations of learning and experience. Now with the walls raised, I will go on to the roofing. I will try and evaluate this disjoint between objective and subjective truths using the various areas of knowledge and ways of knowing. ...read more.

Thus, there is a compromise between subjective and objective truth. Historians, rather than reporting actually 'speculate', 'interpret' and 'construct' opinion and context about events in the past. These various prejudices make it different to gauge the validity of historical conclusions. Man has been guilty on many counts for superstition and uncritical acceptance of historical data. In light of these facts can we call historical data undisputable? Most truths influenced by biases, limitations and subjection to external influences. Subjective influences undermine the objective interpretation of these historical conclusions. A historian always chooses sources that echo his personal prejudices. Although he may try to cast away personal biases an element of chauvinism is still prominent in most reports of history. We are also stuck in the dilemma such that it is nearly impossible to have all the evidence- there are always gaps that are irrecoverable or open to several opinions. History is not just about the facts but also the historian's interpretation, argument, evaluation- biases: assumptions rooted in personal, background, moral standards. History also has its political connotations and denotations. The victor and the downtrodden have a very varied account of historical events. Tactics such as censorship show political expediency and distortion of fact- the reluctance of mankind to get a grip on the truth but rather to tow the line. In such circumstances, knowledge and consent is not groomed rather it is manufactured through indoctrination. ...read more.