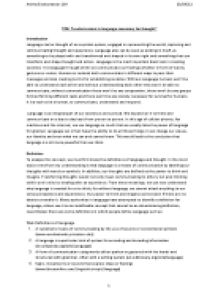 To what extent is language necessary for thought?

﻿Anitha Sivakumaran 12H 23/09/12 TOK: To what extent is language necessary for thought? Introduction Language can be thought of as a symbol system, engaged in representing the world, capturing and communicating thought and experience. Language also can be seen as existing in itself, as something to be played with and transformed and shaped in its own right and something that can transform and shape thought and action. Language is the most important basic tool in creating societies. It is language through which we communicate our feelings whether in form of words, gestures or voices. Humans or animals both communicate in different ways to pass their messages and also creating norms for establishing societies. Without Language humans won't be able to understand each other and without understanding each other they won't be able to communicate, without communication there won't be any cooperation, there won't be any groups formed forming different tasks and there won't be any society necessary for survival for humans. It is a tool to be a human, to communicate, understand and respond. ...read more.

Signs, movements or sounds that express ideas or feelings (www.ldoceonline.com/Linguistics-topic/language) Web Definitions of Thought 1. The act or process of thinking (http://www.thefreedictionary.com/thought) 2. The product of mental activity; that which one thinks (http://dictionary.reference.com/browse/thought) 3. An idea or opinion produced by thinking or occurring suddenly in the mind (Google definition) 4. Any mental or intellectual activity involving an individual's subjective consciousness (http://en.wikipedia.org/wiki/Thought) From the sixth Web definition of language, we see that language ?expresses ideas and feelings? which reside in our thought. Our idea and feeling are invisible actions which can only be understood by an individual that possesses it, if not communicated. But the only way they can be expressed is to communicate them to other parties with the use of language in either verbal or non verbal. For example, a scientist who has new discovery can only expresses his ideas about the discovery by means of communicating it to others and thus improving the development of the society in Science and Technology. There are also elements of language that make it easier for us to understand the world we live in. ...read more.

Conclusion To this end Language can be concluded to be power due to its influence on all areas of knowledge. A Philosopher, Ludwig Wittgenstein states that ?the limit of language is the limit of knowledge?. From Ludwig statement, it can be deduced that language is power since it is significant in every areas of development because it plays large role for basic awareness of each development areas. So with all things considered, language is a lot more powerful than we think. Without it, we would not be able to handle any thought. Through the direct link between our thoughts and our language, we can be extremely influenced by the usage of labels and their sounds. Through such things as limiting one's vocabulary or using ambiguity, one can effectively control other disciplines. An important thing to realize is that by understanding the power of language, we can learn how to use it more effectively and we can reduce its influence on our thoughts. Human kind's quest for knowledge is only limited by our language and its ability to control what we can and cannot know. We need language to think and interpret everything we experience and to put it into perspective. ...read more.