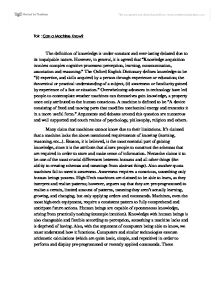 TOK, can a machine know

Tok : Can a Machine Know? The definition of knowledge is under constant and ever-lasting debated due to its impalpable nature. However, in general, it is agreed that "Knowledge acquisition involves complex cognitive processes: perception, learning, communication, association and reasoning." The Oxford English Dictionary defines knowledge to be "(i) expertise, and skills acquired by a person through experience or education; the theoretical or practical understanding of a subject, (ii) awareness or familiarity gained by experience of a fact or situation." Overwhelming advances in technology have led people to contemplate weather machines can themselves gain knowledge, a property once only attributed to the human conscious. A machine is defined to be "A device consisting of fixed and moving parts that modifies mechanical energy and transmits it in a more useful form." Arguments and debates around this question are numerous and well supported and touch realms of psychology, philosophy, religion and others. ...read more.

Human beings are capable of spontaneous knowledge, arising from practically nothing (example intuition). Knowledge with human beings is also changeable and flexible according to perception, something a machine lacks and is deprived of having. Also, with the argument of computers being able to know, we must understand how it functions. Computers and similar technologies execute arithmetic calculations (which are quite basic, simple, and repetitive) in order to perform and display pre-programmed or recently applied commands. These calculative methods are also instilled by humans (who determine what and what computers cannot know). This means they're limited, based on previous knowledge, cannot acquire new knowledge, cannot reason qualitatively, and only performs tasks (against knowing consciously). Some others argue that the new technology the world currently has is capable of knowing. Their strongest argument is Artificial Intelligence (AI). There are many philosophies about Artificial Intelligence, and knowledge itself is a central issue in the matter. ...read more.

This statement is also self-explanatory. The strongest philosophical stance currently is that "The brain can be simulated."- Hans Moravec & Ray Kurzweil. They, among others, claim that with the new biological and physiological understanding of the brain and its functions, it can be simulated with hardware and software programs, giving machines human-like knowing. These are the basic and most powerful arguments concerning AI, the main position from which arguers claim that machines are capable of knowing. The question of whether a machine is capable of knowing is very debatable. Until knowledge is properly and precisely defined, any answer can be heavily supported. Until further advances in the realm of technology however, we cannot ultimately claim machines know, due to their limits in many a trait human's possess and use in their knowing process. Also knowing requires a conscious, unconscious, and subconscious, which is currently limited to human beings. "There are no facts, only interpretations"-Nietzsche, and since machines cannot make a conscious choice in believing (being only limited to what it is pre-programmed to "know"); I believe a machine is not capable of knowing. ...read more.