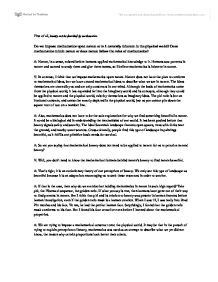 TOk Discussion - Do we impose mathematics upon nature or is it naturally inherent in the physical world? Does mathematics mimic nature or does nature follow the rules of mathematics?

First of all, beauty can be described by mathematics. Do we impose mathematics upon nature or is it naturally inherent in the physical world? Does mathematics mimic nature or does nature follow the rules of mathematics? A: Nature, in a sense, existed before humans applied mathematical knowledge to it. Humans saw patterns in nature and wanted to study them and give them names, so I believe mathematics is inherent in nature. V: In contrast, I think that we impose mathematics upon nature. Nature does not have the plan to conform to mathematical ideas, but we have created mathematical ideas to describe what we see in nature. The ideas themselves are created by us and are only constructs in our mind. Although the basis of mathematics come from the physical world, it has expanded far into the imaginary world and its concepts, although they could be applied to nature and the physical world, exist by themselves as imaginary ideas. The phi ratio is but an irrational constant, and cannot be exactly depicted in the physical world, just as you cannot pin down the square root of two on a number line. A: Also, mathematics does not have to be the sole explanation for why we find something beautiful in nature. It could be a biological aid in understanding the mechanisms of our world. ...read more.

These have contributed a great deal not only to the mathematical community, but to the physical world as well, where many others can benefit from the new knowledge gained. Show Phi efficiency video: (0:00 - 3:03) http://www.youtube.com/watch?v=_w19BTB5ino&feaure=related V: "Nature is governed by efficiency." We can relate this to natural selection. Natural selection picks organisms that are best suited to their environment. What are the best organisms? They are the ones with the best traits relative to their respective environments. What qualities constitute a good trait? In my opinion, a good trait should be something that is both simple and efficient. Let us go back to the sunflowers. We can explain and describe how the distribution of their seeds are based on the optimization of space efficiency using a simple mathematical tool, the Fibonacci sequence. Do we find the structure beautiful because of its efficiency? A: Yes, I believe so. To me, the ability to be efficient is inherently elegant, in that many biological structures have evolved to make the most out of limited resources. Many organisms have evolved to survive using only a minimum amount of nutrients to carry out necessary body functions. A: However, we have to recognize that organisms did not evolve to fit our sense of beauty. They grew in order to be the most efficient at surviving. If it turns out to be beautiful, that is merely a bi-product of its struggle to survive. ...read more.

I think of the two statements, the former is more beautiful because it is visually more appealing, and represents the concept more accessibly. A: Now we have to think, is beauty represented by truth in mathematics? Does mathematics have truth when it corresponds to phenomena that we perceive in nature? Or does mathematics have truth when it coheres to a designed structure of definitions and axioms? A: With natural sciences, we use perception to see, hear, or touch something in the physical world, and use those observations to provide evidence and get closer to the truth. Mathematics, in contrast, does not need physical perception to provide evidence for truth. Natural sciences rely on observation and we always have a degree of uncertainty in these observations. Mathematical modelling, however, in itself is undeniable in its certainty. The main issue is how accurate the application of an internally perfect model is in the natural world. If it correctly describes a pattern inherent in nature, we can assume the theory to be true. A: As well, to the average Joe, mathematics has some sort of undeniable truth because it is thought to use numbers and complicated formulas. We readily believe in phi because it has to do with math, which we relate to numbers and their cold clear-cut quality of truth. We may confuse priori knowledge, such as 1+1=2, with new knowledge generated by mathematics and see them as equally valid and sound. ?? ?? ?? ?? 4 ...read more.