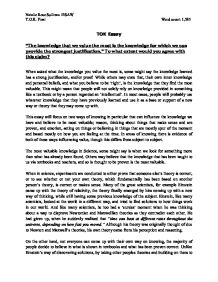 TOK Essay "The knowledge that we value the most is the knowledge for which we can provide the strongest justification." To what extent would you agree with this claim? When asked what the knowledge you value the most is, some might say the knowledge learned has a strong justification, and/or proof. While others may state that, their own inner knowledge and personal beliefs, and what you believe to be 'right', is the knowledge that they find the most valuable. This might mean that people will not solely rely on knowledge provided in something like a textbook or by a person regarded an 'intellectual'. In most cases, people will probably use whatever knowledge that they have previously learned and use it as a base or support of a new way or theory that they may come up with. This essay will focus on two ways of knowing in particular that can influence the knowledge we have and believe to be most valuable; reason, thinking about things that make sense and are proven, and emotion, acting on things or believing in things that are mostly spur of the moment and based mostly on how you are feeling at the time. ...read more.

However, this only relates to me, for instance if some of the great scientists of history did not come up with their own knowledge, the knowledge which they most value, then I doubt that I would have the knowledge which I value now. Value, therefore, comes when a scientific idea is meaningful to us, and that meaning comes from experiments. In Maths, like other subjects that are considered reason based areas of knowing, the knowledge which is most valued, for some is the knowledge that can be proven. However, some may ask whether, even if a formula that has not until now been created, yet it gives the same result for the equation as one that has been created and proven correct, can the new formula still be considered usable from now on, or not? There are some people who find it more understandable by coming up with their own formulae or method of solving the question. An example of this is if a student were to change the formula or come up with one of his own that also solved the problem and was easier for him to understand. A colleague of mine did this; while we were studying the subject of integration he changed the general formulae into something that he found simpler to use. ...read more.

For example, when we were reading the novel Catcher in the Rye, by J.D. Salinger, I found that it was easy to understand. This is because it was easy to relate to the main character, Holden Caulfield, as his way of speaking is modern and more associated with my age, there is also a more realistic and straight forward setting, compared to other novels, such as The Handmaid's Tale, by Margaret Atwood. Although coming up with your own view of the text is the best way to express the meaning of the text in your personal voice, if one does not fully understand it or doesn't have many ideas about it, it is not completely bad to look at other people's ideas. It gives you a broader scale of ideas and it could help you understand better. By fitting it to other knowledge it has more value and meaning. In conclusion, it is evident that there is a different value of knowledge for each different subject. There are those subjects which seem more based on knowledge that is learnt through textbooks and outsider influences of some sort. While other subjects are more based on the knowledge that 'comes from within' (in other words: instinct or intuition), the 'inner' knowledge, that has little or no outsider influences. ?? ?? ?? ?? Natalie Rose Sullivan 13SAW T.O.K. Final Word count: 1,585 ...read more.