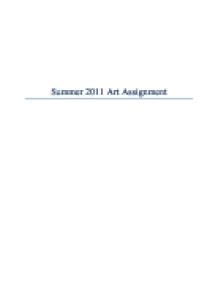 Summer 2011 Art Assignment 1. As you approach the art gallery, you will see a large, spindly sculpture outside the main doors. It is of a spider with a sac of eggs under its abdomen. a) What is your initial reaction upon seeing this piece? While walking towards the National Art Gallery, the large sculpture of the black spider became more and more visible with each step. At a distance, I immediately noticed its superiority and thought of myself as a smaller being. It was standing on its long legs sitting at the front entrance of the gallery. As I was sitting on a bench a few minutes from the spider, I realized that it was compelling me to proceed forward. Its long legs, black colour, and its vast structure seemed very appealing to me and it looked as if it were protecting the gallery and the objects inside of it. b) Do you think the initial reaction is a very important quality in art? Yes, I believe that the initial reaction is a very important quality in art. In general, first impressions are known to be important in any aspect of life. In art, the initial reaction can determine whether or not one would want to proceed further into analyzing the piece of art. If the initial reaction is one of appeal, then one would want to see the art more closely rather than just pass by it. This may have been the case of the spider; it was possibly there to attract people to the gallery, giving a strong initial reaction. c) Be sure to walk around the work, under the work and to touch the work. Has your reaction to this work changed? After walking underneath the spider and touching the spider, my reaction did not change. In fact, my feelings towards the spider were reinforced after being nearer to it. ...read more.

The inner architecture of the Chapel can be judged as a piece of art. After sitting inside the Chapel for a few minutes, it became clear that this structure embodies not just the architectural significance, but also the historical significance of Canada. The Chapel's elegant architecture is home to a few sculptures and altars, which are also seen as art. b) What qualities do you think buildings need to be called good architecture? There are a few qualities that buildings should have to be known as 'good architecture'. Firstly, I believe that they should be appealing to the public that passes by the building. Being alluring can be different for different types of buildings. For example, if it were a shopping mall, it should be modern and more stylistic than a library would need to be. The architecture should be based on the type of building and the type of public it needs to attract. Moreover, the design of the building is important. If designed appropriately with its surroundings before building the structure, the architecture of the building should not fail. To me, as long as the building encompasses, in its architecture, the required characteristics of its purpose as a building, then it can be called good architecture. c) Excluding Parliament Hill, Chateau Laurier, Supreme Court of Canada, the National Gallery of Canada, museums, or any other government building - Name one building in Ottawa you consider art and one building you think is not art. Explain. There are many buildings in Ottawa that can be considered good art, in the form of architecture. One building in particular that stands out to me is Lisgar Collegiate Institute. It is Ottawa's oldest high school, and it is home to one of Ottawa finest old architecture. The building itself is art because it has lasted through the country's history from the late 1800's. It has gone through many important events such as both the World Wars and many notable discoveries. ...read more.

However, it is not just art anymore once commercial success is involved. With an artist's pieces being commercialized, the art become products as it becomes a source of income and publicity for them; not only a piece of art they had made for the sake of it being art. Final Question 10. If your portrait were to be displayed in this Art Gallery, what would be your preferred time period and media? Why? Describe how it would look and any specific details you would include. If my portrait were to be displayed in this Art gallery, I would prefer it to be placed in the 1800s, or in the first room of the Canadian art section. It would be painting made on oil on canvas, relating to the other paintings in the room. There would be a dark background with me sitting on a chair, with a pose tilted 45 degrees from the painter. I would be wearing a dark coloured suit, giving a very elegant look to the portrait. There would be minimalistic details in the painting as simple paintings with a dark, bold look to it make it an appealing portrait. I would not be looking straight at the painter; my face would be tilted away from the painter to give it a more serious look. I would want it to be on oil on canvas as it was one of the most commonly used mediums that gave a precise look in portraits. My portrait would be in that room as the portraits there were of powerful people and those people who were painted chose it to be that way, which is what I would want. However, there would be less paintings in that room to make it less crowded so people can focus more on a select few portraits, including mine. I picture portraits to be very elegant and more on the serious side which is why I picture my own portrait like this. ...read more.