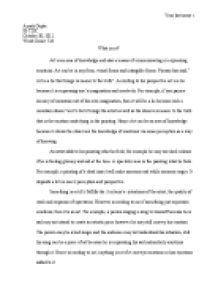 ﻿Your last name Ayush Gupta IB TOK October 30, 2012 Word Count: 526 What is art? Art is an area of knowledge and also a means of communicating or expressing emotions. Art can be in any form, visual forms and intangible forms. Picasso has said,? Art is a lie that brings us nearer to the truth?. According to his perspective art is a lie because it is expressing one?s imagination and creativity. For example, if one pains a scenery of mountain out of his own imagination, then it will be a lie because such a mountain doesn?t exit?s but it brings the artist as well as the observers nearer to the truth that is the emotion underlying in the painting. ...read more.

Something is art if it fulfills the 3 criteria?s- intentions of the artist, the quality of work and response of spectators. However according to me if something just expresses emotions, then it is an art. For example, a person singing a song to himself because he is sad may not intend to create an artistic piece however he may still convey his emotion. The person may be a bad singer and the audience may not understand his situation, still his song can be a piece of art because he is expressing his sad melancholy emotions through it. Hence according to me, anything is art if it conveys emotions or has emotions added to it. ...read more.

For example, there is a painting of a book and a painting of a tree. A person who hates studies may not consider the painting of book as an art because it may evoke hatred in his mind. This has happened because of the subject of the painting; Furthermore, if he likes nature, then he is likely to consider the painting of tree as a very good art. This has also happened because of the subject of art that is a tree which evokes sense of peace in his mind. Therefore, here the context of art has limited as well as enhanced one?s understanding of something as an art. It can be concluded that it depends on the observer entirely because it is what he sees in it. ...read more.