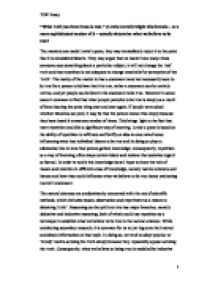 What I tell you three times is true. (Lewis Carroll) Might this formula or a more sophisticated version of it actually determine what we believe to be true?

"What I tell you three times is true." (Lewis Carroll) Might this formula - or a more sophisticated version of it - actually determine what we believe to be true? The moment one reads Lewis's quote, they may immediately reject it to the point that it is considered bizarre. They may argue that no matter how many times someone says something about a particular subject, it will not change the 'real' truth and that repetition is not adequate to change ones belief or perception of the 'truth'. The reality of the matter is that a statement must not necessarily have to be true for a person to believe that it is true, rather a statement can be entirely untrue, and yet people can believe in the statement to be true. However in some cases it common to find that what people perceive to be true is simply as a result of them hearing the same thing over and over again. If people were asked whether Muslims eat pork, it may be that the person knows this simply because they have heard it numerous number of times. This brings light to the fact that mere repetition could be a significant way of knowing. ...read more.

In the natural sciences, the 'truth' can be deduced through experimentation and consequently deduction as opposed to simply inducing 'true' knowledge from repetitive secondary information. Deductive reasoning is whereby a 'true' conclusion is drawn as a result of previously given information being true. In physics, students have the opportunity to experiment and arrive at conclusions to determine certain laws and concepts. During these experiments, we usually attempt to acquire the most accurate results by repeating the same experiments through several trails by altering the independent variables. Through this repetition, we obtain the most accurate proof that is required to approve or disprove various theories, laws and concepts. At the same time, the repetition of similar conclusion often formulates what we believe to be true in the natural sciences. In the first trimester of my diploma program, in physics class, one of my projects was to explain Newton's First Law of Motion, which states "The velocity of a body remains constant unless the body is acted upon by an external force". I was required to test this law by experimentation and present my findings to the whole class. In doing so, I was able to confirm Newton's First Law of Motion using a marble and various surfaces of wooden planks. ...read more.

that the war increased tensions in Europe, while the other three sources stated that the increased tensions were as a result of the rise of new ideologies, namely Fascism and Bolshevism. Thus repeated statements were counter productive as one set of repetitions stated one side while another set supported an alternate side. Thus Carroll's statement lacks consistency in its reference to repetition because there is no given solution to when one comes across two contradicting repetitions. We can therefore conclude that Carroll's statement can be applied in history as far as the basic facts are concerned but cannot venture beyond that and delve deeper into history. In conclusion, Lewis's statement has shown occurrences in the natural sciences through repetition resulting from deductive and inductive reasoning that could potentially determine what we believe to be true. However, emotional attachment to specific hypothesis often cause confirmation bias leading to flawed 'truths'. Furthermore, despite our reliance on induced conclusions from repetitive results, induction is a logic that cannot achieve absolute truth. Additionally, in history, while repetition could be an effective method to arrive at induced conclusions of what we believe to be true, the repetition of contradictory views due to emotional bias leads to a lack of complexity and sophistication to determine what we believe to be true. ...read more.