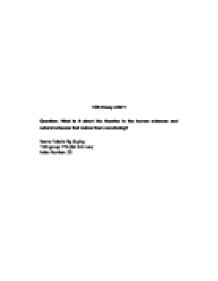 TOK Essay 2/2011 Question: What is it about the theories in the human sciences and natural sciences that makes them convincing? Name: Valerie Ng Suying TOK group: P1b (Mr Eric Lau) Index Number: 20 It is widely assumed that natural and human sciences provide a reliable form of knowledge about the world, whether about natural phenomena or the behavior of individuals or a society. Statistics have shown that people have a high level of confidence in the scientific community. Scientists and their scientific theories are usually placed above leaders of other institutions such as business leaders, religious leaders, or elected officials (americanprogress.org). However, scientific theories are not completely certain and may not always provide an accurate view of the world. They are fallible and are subjected to change. So what is it in the theories of the human and natural sciences that makes them so convincing? Why do people have such high regard for them to the extent that some have begun to take them for granted as being true? This essay will attempt to discuss theories in the natural sciences followed by theories in the human sciences. To begin, it is important to define the key terms, namely 'scientific theories' and 'convincing'. ...read more.

In chemistry, mathematics is needed to calculate the concentrations of solutions in moles. Even in ancient Greek, "many sophisticated understandings of our Solar System were based on the Greeks' strong grasp of geometry". (e-education.psu.edu) Mathematics is deemed as the most certain area of knowledge to many. Although not necessarily true, it is believed to provide absolute truth and since it is the basis of scientific theories, people tend to be convinced by them. For example, the scientific community did not accept Michael Faraday's electromagnetic field theory because no mathematical terms were able to provide any convincing explanation at that time. James Maxwell later provided the necessary mathematical equations to justify Faraday's theory, which was then accepted (Lau). Thus, theories in the natural sciences are convincing because mathematics is the foundation of it. While theories in natural sciences are convincing due to the nature of the scientific method and procedure, theories in human sciences are much more complex. The human sciences are the study of the human behavior. Though both the natural and human sciences require the same methodology, i.e. observation and experimentation, theories about the way humans behave tend to be less consistent as every individual is different. ...read more.

As a result, the selling prices for new cars will increase significantly, making them more expensive to potential buyers (todayonline.com). Consumer reaction is to seek cheaper alternatives, i.e. used car market, driving the demand for used cars and prices up. In this example, buyers used past COE supply and price trends to anticipate prices of new cars and have responded as predicted by the market theory by seeking cheaper alternatives in the used car market. Although the above point generally applies to other areas of knowledge (AoKs) such as ethics, art and religion, the key characteristic that separates scientific theories from theories in other AoKs is the process of rigorous proofing and falsification, thus arriving at fairly coherent results. No other AoK shares this unique feature: history cannot be proven; mathematical axioms cannot be proven invalid. Due to this characteristic, scientific theories have that persuasive ability. Hence, when a theory corresponds to the society's experiences or actions, the theory naturally becomes even more convincing. In summary, repeatability and reproducibility of the scientific method makes theories in the natural sciences convincing. Also, mathematics as the foundation provides greater persuasive power to scientific theories. While theories in the human sciences are much more complicated, the same set of criteria can be applied to them as well. ...read more.