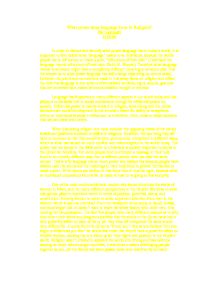 What power does language have

What power does language have in Religion? Ela Topcuoglu 15.09.08 In order to discuss and identify what power language has in today's world, it is important to first define what 'language' means to an individual, because the words people use to tell a story or make a point "tell a story of their own" (Take back the language: words tell a story of their own. Keith M. Woods.) Therefore what language means to someone might have a completely different meaning to someone else, thus the answer as to what power language has will change depending on who is asked. However the points and connections made in this essay focus on religion and reflect the idea that language is any system of formalized symbols, signs, sounds, gestures that are conceived as a means of communication thought or emotion Language itself operates in many different aspects in our world today and has played a remarkable role in social interactions through its influential power on society. ...read more.

The fact that people have many different reasons as to why they cover their wives and daughters justifies that the words in the Quran have had a very powerful affect on each of them, yet they have all interpreted the same words very differently. A quote from the Quran is "If you don't live as you believe then you begin to believe as you live" its words like these that should have a powerful affect on Muslim women, causing them to stand up for their rights and position in the Muslim world. Religion wasn't created to separate the world into strong and bias systems causing so much hate amongst countries, it started as a means of bringing people together as one, yet the words that were passed down and rewritten by so many people is what has caused conflict between the varied interpretations of the words and rules of each religion. The main conflict in my world is the misinterpretation of statements and rules in the Quran that surround the topic of women and men. ...read more.

Through the interpretation of what has been seen so far from the Quran it is already difficult to comprehend how words can evoke different connotations. Therefore although language has power in many different aspects in the world today, it is almost impossible to discuss and interpret the many ways language can manipulate, motivate, influence, help, and inform us of the many events and conflicts that shape how our world works and what we hear, say, write, read and interpret not only affects us as an individual but leaves a mark in society. Therefore language has a very strong relationship with power in terms of how people interpret, follow and share what they understand from religions system of formalized symbols, signs, sounds, gestures that are conceived as a means of communication, thought or emotion passed down by the profits that are the main characters in religions history. Sources 1.) http://www.parvez.com/islam_quran_articles.asp This website was the main source that I got my information from, I decided to analyse and interpet an article based on religion rather than the article given in class. ...read more.