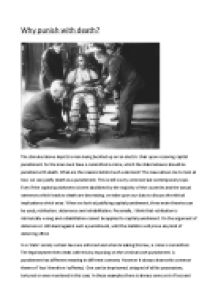 Why punish with the death penalty?

﻿Why punish with death? The stimulus above depicts a man being buckled up on an electric chair upon receiving capital punishment. So the man must have a committed a crime, which the state believes should be punished with death. What are the reasons behind such a decision? The issue allows me to look at how we can justify death as a punishment. This is still a very controversial contemporary topic. Even if the capital punishment is been abolished by the majority of the countries and the actual sentences which leads to death are decreasing, we take upon our duty to discuss the ethical implications which arise. When we look at justifying capital punishment, three main theories can be used; retribution, deterrence and rehabilitation. Personally, I think that retribution is intrinsically wrong and rehabilitation cannot be applied to capital punishment. On the argument of deterrence I still stand against such a punishment, until the statistics will prove any kind of deterring effect. In a ?state? society certain laws are enforced and when breaking this law, a crime is committed. The legal stystem then deals with this by imposing on the criminal a set punishment. A punishment has different meaning in different contexts. However it always shares this common theme of ?loss? therefore ?suffering?. One can be imprisoned, stripped of all his possessions, tortured or even murdered in this case. ...read more.

This roots from its statement that the criminals ought to be punished on moral grounds, differing from revenge and its arbitrary judgement. If we ought to punish someone on moral grounds it?s not right we do it immorally. If I kill someone, then the moral code says I?ve done something bad. By stating that killing is evil, if somebody would sentence me to capital punishment they would be going against their own personal creed meaning that morality is meaningless, rendering the first statement of ?me killing somebody is wrong? false or completely subjective. This reasoning is not to be misinterpreted. If somebody kills someone, consequently in most countries we would be take away it?s freedom. This in any other context is morally wrong, but we are justified. We must find adequate punishments in order to maintain society integral. However death is too much of an immoral act. Philosophers such as Camus and Dostoyevsky believed that death penalty was unjust. They argued this on the grounds that the criminal suffered mentally before actually being executed. The long wait that preceded the certainty of getting killed, it served as an unwarranted psychological torture that added up to the death. In my view I think that leaving a criminal alive, especially in cases like murder, is harsher. ...read more.

For deterrence the legal system has to be flawless, as there could be attempts of terrorizing the public with random punishments. The state could simply set up some fake courts and maybe extract false confessions through torture. For retribution, where we talk about ?deserving the punishment?, there is the problem of the accidental mistake of sentencing innocent people. This has happened due to the complexity of the system and the fallibility of humans, for example errors from witnesses, jurors and prosecutors. In the USA, 130 people sentenced to death have been found innocent since 1973 and released from death row. Mill acknowledges this issue and impossibility to pay compensation to the innocents sentenced. He accepts there will be mistakes and just argues that the legal system overall aims only to prosecute the criminals and if any ground-breaking information surfaces the sentenced should be commuted. The capital punishment in my view cannot be justified by any of the three theories. Obviously rehabilitation is not a valid theory due to the type of punishment. Looking at the world we live in now, we can witness how we have socially evolved throughout our history. The death penalty is something widely accepted in past times, maybe supported by old creeds like revenge and retribution. This fails however on the moral side. Wrong punished by wrong. Deterrence is definitely more rationale but, never mind the difficulty of measuring it?s effectiveness, crime rates would really decrease with an increase in legitimate arrests and convictions. ...read more.