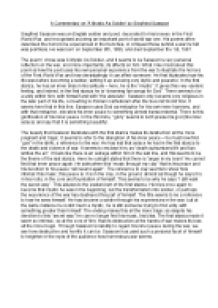 A Commentary on 'A Mystic As Soldier' by Siegfried Sassoon

﻿A Commentary on 'A Mystic As Soldier' by Siegfried Sassoon Siegfried Sassoon was an English soldier and poet, decorated for his bravery in the First World War, and recognised as being an important poet of world war one. His poems often described the horrors he experienced in the trenches, or critiqued those behind a war he felt was pointless. He was born on September 8th, 1886, and died September the 1st, 1967. The poem I chose was A Mystic As Soldier, and it seems to be Sassoon?s very personal reflection on the war, and more importantly, its affects on him. What I like most about this poem is how the poet uses his own personal experience from the war to illustrate the horrors of the First World War and how devastatingly it can affect someone. ...read more.

In the third line, ?glory? seems to both praise his god (his inner solace) and say that it is something beautiful. The beauty that Sassoon illustrates with the first stanza makes its destruction all the more poignant and tragic. It seems to refer to the disruption of his inner peace ? he must now find ?god? in the strife, a reference to the war. He has lost that solace he had in the first stanza to the death and violence of war. It seems to enclose him, as ?death outnumbers life and fury smites the air?. It feels like there is an outrage within him in the last line, and this seems to be the theme of the last stanza. ...read more.

The title seems to be a reference to how he sees himself. He has become a soldier through his experiences in the war, but at the same instance he is still much a mystic, he is still someone trying to find unity with something greater than himself. The ending makes this all the more tragic as despite his devotion to this ?secret way? he can no longer find his music, his bliss. The first stanza made it seem so intrinsic, so at the core of him, that its destruction at the hands of war makes its loss all the more tragic. Through Sassoon?s inability to regain his inner peace during the war, we see how destructive and horrific it can be. Sassoon has used such a personal facet of himself to heighten in the eyes of the audience how horrendous war seems. ...read more.