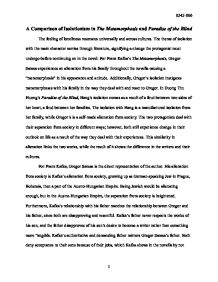 A Comparison of Isolationism in The Metamorphosis and Paradise of the Blind The feeling of loneliness resonates universally and across cultures. The theme of isolation with the main character carries through literature, signifying a change the protagonist must undergo before continuing on in the novel. For Franz Kafka's The Metamorphosis, Gregor Samsa experiences an alienation from his family throughout the novella causing a "metamorphosis" in his appearance and attitude. Additionally, Gregor's isolation instigates metamorphoses with his family in the way they deal with and react to Gregor. In Duong Thu Huong's Paradise of the Blind, Hang's isolation comes as a result of a feud between two sides of her heart, a feud between her families. The isolation with Hang is a manufactured isolation from her family, while Gregor's is a self-made alienation from society. The two protagonists deal with their separation from society in different ways; however, both still experience change in their outlook on life as a result of the way they deal with their experiences. This similarity in alienation links the two works, while the result of it shows the difference in the writers and their cultures. For Franz Kafka, Gregor Samsa is the direct representation of the author. His alienation from society is Kafka's alienation from society, growing up as German-speaking Jew in Prague, Bohemia, then a part of the Austro-Hungarian Empire. Being Jewish would be alienating enough, but in the Austro-Hungarian Empire, the separation from society is heightened. ...read more.

For The Metamorphosis by Franz Kafka and Paradise of the Blind by Duong Thu Huong, the authors utilize isolation to show the reader how to live life. The messages of the two stories differ with a battle of the cultures. The authors reflect the thoughts of the East and West. The Asian culture, reflected by Paradise of the Blind, and the European culture, reflected by The Metamorphosis, is vastly different, showing the optimism of the East and pessimism of the West. With this the reader sees the cultural differences in literature when it comes to the themes and utilization of characters. Word Count 1,230 Works Cited Duong, Thu Huong. Paradise of the Blind. Trans. Nina McPherson. New York: Perennial, 2002. Print. Kafka, Franz. The Metamorphosis and Other Stories. Trans. Joachim Neugroschel. New York: Charles Scribner's Sons, 1993. Print. A Comparison of Two Passages from The House of the Spirits The opening of a novel is the most critical point for the author. Here the author has the opportunity to hook or lose the reader, and furthermore decides the tone and style for the rest of the story. On the other hand, the ending is the author's final appeal to the reader, offering one final venue for offering the overall massage. With an ending the author desires to leave one lasting message for the reader to take away from the work. In Isabel Allende's The House of the Spirits, a tale about the Trueba family history told through the family's three main women, ...read more.

Alba acts as an agent through which Allende speaks through and shares similarities with to tell his message. Alba acts as the model of Allende because her compilation responds to Allende's original manuscript. A letter to her one hundred year-old grandfather provided the starting point that branched off the storyline that winds and turns around a family history. The two passages provide interesting connotations for the reader to gather based on the information available to the audience. The very first paragraph offers an exposition and provides the baseline for the reader's understanding of the work. It gives a starting point for the magical realism to build upon and provides an identifier for the narrator and its point of view. Interestingly enough, Allende clouds this point of view by misconstruing it at first by making it appear as if the narrator is Allende herself by using the personal subject pronoun "I", revealing the writing process, and stating that the stories offer a remedy to her tortures. Instead, the narrator is revealed in the resolution of the novel and sets itself as Alba, the youngest Trueba daughter who represents the modern times thinking of the new generation. Fortunately enough, Allende completely links herself with Alba because the two value the history of past family generations, live through the same time, and finish circularly with an italicized dictation of Barrab�s arriving at sea. The two passages compliment each other as they offer different connotations to the audience since they include different levels of information to the audience, which eventually clears up in the circular style that offers a precise character presentation. ...read more.