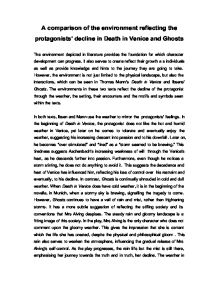 A comparison of the environment reflecting the protagonists decline in Thomas Manns Death in Venice and Ibsens Ghosts.

A comparison of the environment reflecting the protagonists' decline in Death in Venice and Ghosts The environment depicted in literature provides the foundation for which character development can progress. It also serves to create reflect their growth as individuals as well as provide knowledge and hints to the journey they are going to take. However, the environment is not just limited to the physical landscape, but also the interactions, which can be seen in Thomas Mann's Death in Venice and Ibsens' Ghosts. The environments in these two texts reflect the decline of the protagonist through the weather, the setting, their encounters and the motifs and symbols seen within the texts. In both texts, Ibsen and Mann use the weather to mirror the protagonists' feelings. In the beginning of Death in Venice, the protagonist does not like the hot and humid weather in Venice, yet later on he comes to tolerate and eventually enjoy the weather, suggesting his increasing descent into passion and to his downfall. Later on, he becomes "over stimulated" and "tired" as a "storm seemed to be brewing." This tiredness suggests Aschenbach's increasing weakness of will through the Venice's heat, as he descends further into passion. Furthermore, even though he notices a storm stirring, he does not do anything to avoid it. ...read more.

From the beginning of the play, a contrast between Mrs Alving's ordered life and menacing world outside can be seen. The interior of the Mrs Alving's home is carefully controlled and artificial, which is her natural environment, compared to the dull and gloomy atmosphere of the world outside. When Mrs Alving speaks of "law and order," she is standing by the window, and she "taps on the window frame," emphasising her wish to break away from duty. Mrs Alving's glances and stares out the window are frequent throughout the play, suggesting the continual desire to be free. After the fire of the Orphanage, the characters run off to look at the fire, leaving the room empty, open to the night and darkness. This implies that her haven is no longer under her control. What was once a haven has now been invaded by something sinister. In Act III, after the revelation of Oswald's illness, Mrs Alving tries to escape from the room that once was her haven. However, in reality, it is a prison, which she realises when Oswald brings her back and locks the door. This room is a symbol of her confinement to societal conventions which she loathed, and now, the consequences are locked with her. ...read more.

This encounter was what ultimately brought about the demise of Mrs Alving, as she could not continue the fa�ade that she had lived with for so many years; it was only with her encounter with Oswald where she began to change her view, "And suddenly I seemed to see my whole life... everything in a new light." These encounters had broken her control. The encounters in both texts reflect the protagonists' changes, especially their deterioration, leading to their eventual decline. Throughout both texts, motifs and symbols appear frequently. They serve to anchor significant events and foreshadow the protagonists' downfall. In Death in Venice, several motifs arise in the novella. The nameless strangers often have red features. Red is often associated with the devil, and thus temptation, emphasising Aschenbach's decline into sensuality and passion. The disinfectant is also a motif in the novella. Aschenbach first notices the smell in the air, and he did not like it. Yet, as the novella progresses, he begins to think it smells "sweet." This suggests the corruption and l**t has already begun and will just continue. This disinfectant is also the city's secret, and it parallels with Aschenbach's secret passion, his crime. The constant references to Greek mythology are also a significant motif. There are references to Apollonian and Dionysian philosophical concepts throughout the novella, reflecting the juxtaposition of logic and reason, and passion and wildness. ...read more.