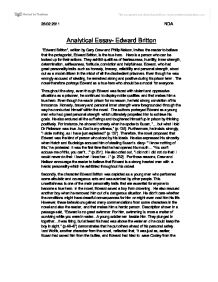 Analytical Essay- Edward Britton "Edward Britton", written by Gary Crew and Philip Nelson, invites the reader to believe that the protagonist, Edward Britton, is the true hero. Hero is a person who can be looked up for their actions. They exhibit qualities of fearlessness, humility, inner strength, determination, selflessness, fortitude, conviction and helpfulness. Edward, who had great personality traits such as honesty, bravery, reliability and personal strength, stood out as a model citizen in the midst of all the disobedient prisoners. Even though he was wrongly accused of stealing, he remained strong and positive during his prison term. The novel therefore portrays Edward as a true hero who should be a model for everyone. Throughout the story, even though Edward was faced with violent and oppressive situations as a prisoner, he continued to display noble qualities and that makes him a true hero. Even though he was in prison for no reason, he held strong conviction of his innocence. ...read more.

I love her! I love her...!" (p. 232). For those reasons, Crew and Neilson encourage the reader to believe that Edward is a strong hearted man with a heroic personality which he exhibited throughout his ordeal. Secondly, the character Edward Britton was depicted as a young man who performed some altruistic and courageous acts and was admired by other people. This unselfishness is one of the main personality traits that are essential for anyone to become a true hero. In the novel, Edward saved a boy from drowning. He also rescued another boy when he removed him out of a dangerous situation. He didn't care whether the conditions might have dreadful consequences for him or might even cost him his life. However, these behaviours gained many commendations from some characters in the novel and also the reader, and that makes him a heroic person. Description shown in a passage said, "Edward is no great swimmer. ...read more.

He rose to face the soldiers. He would not plead or struggle." (p.46). In that particular situation, Edward was ready to take on the liability of having Susan's diary even though the soldiers were not targeting him. Additionally, Buckridge slapped his daughter's face and asked her: "Where is he! Where! Tell me now or I will thrash you until you do.", he came out of hiding and said, "I am here," (p.221). This foregrounds that Edward took responsibility for what he had done. His actions in the above situations suggest to the reader that Edward is accountable and establish his heroic image. In conclusion, the reader is led to believe that Edward's actions are those of a true hero who has noble qualities; he was admired by other people and took responsibility even though he was wrongly imprisoned. The novel, "Edward Britton" by Gary Crew and Philip Nielsen privileges the belief that Edward is a person whom the reader should admire and sympathise with. As such, Edward Britton is the true hero of the novel. 857 words (640 words without quotes) ?? ?? ?? ?? 28.02.2011 NDA ...read more.