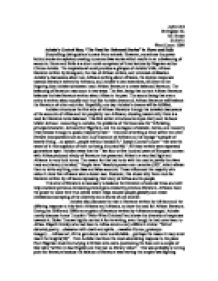 Achebes Central Idea, The Need for Balanced Stories in Home and Exile

Aylin G12 IB English HL Mr. Ernest 31/10/11 Word Count: 1099 Achebe's Central Idea, "The Need for Balanced Stories" in Home and Exile Storytelling distinguishes humans from animals. However, sometimes the power behind stories is exploited creating numerous bias stories which results in an unbalancing of accounts. Home and Exile is a short novel comprised of three lectures by Nigerian author Chinua Achebe. The inspirational novel provides a glimpse of Achebe's life, African literature written by foreigners, the rise of African writers, and universal civilization. Achebe's discussions about non-Africans writing about Africans, the diverse responses towards literature written by Africans, and Achebe's own statements, all direct to the lingering idea Achebe advocates: need African literature to create balanced literature. The balancing of literature may occur in two ways. The first, being that current African literature balances the bias literature written about Africa in the past. The second being that every entity is written about equally and thus like Achebe dreams of, African literature will balance the literature of other countries. ...read more.

Achebe also discusses the rise in literature written by Africans and the differing response to it by both Africans and Africans, to show the need for African literature. During the 1950s and 1960s an eruption of literature written by Africans emerged. Achebe mostly discuses Amos Tutuola's "Palm-Wine Drinkard"and shows the diversity of responses towards it. Dylan Thomas highly merited it for its writing, even though he had never been to Africa. Elspeth Huxley who had been to Africa wrote a very different review: "full of distorted poetry...obsession with death and spirits....macabre Humor, grotesque imagery....African art, if it is genuine,is never comfortable...;perhaps the reason it may never reach the heights(56)". Then Achebe mentions the most astonishing response to the piece from Nigerian students studying in Britain who were questioning the fuss over a couple of folk tales "written in bad English and that had no literary value". This was probably a turning point for literature because the balance of literature was starting-the empire was fighting back. However, many people at the time were still consumed in a mentality started from colonialism such as Huxley. ...read more.

A world with balanced literature means there is a balance between the importance of people that compose the world. There is a balance between ideas and people. All of this fuels a balanced civilization as well. Achebe advocates for writers to stay in their countries to help and support their countries. According to Achebe a universal civilization has not been created by us yet, however creating a balanced literature is one way to reach a universal civilization. Reading "Home and Exile" is a very touching and eye-opening experience because of Achebe's passion. The book covers such difficult aspects about colonization and post colonization. Each chapter of the book leads itself to the idea of just how important the balancing of stories is. The more stories that are written by people who have been colonized balances the stories written by the colonizers. Those stories create new sources for new perspectives of a people and their country. Those stories help fuel a universal civilization. The ideas within this book can be applied to any country that has been colonized or oppressed by others. Also it is not just the balance of stories, but the balance of everything that will generate a universal civilization. ...read more.