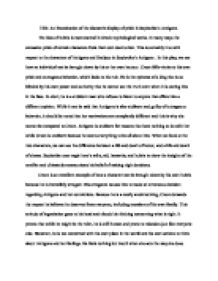 An Examination of the diametric display of pride in Sophocless Antigone

Title: An Examination of the diametric display of pride in Sophocles's Antigone. The idea of hubris is monumental in Greek mythological works. In many ways the excessive pride of certain characters fuels their own destruction. This is certainly true with respect to the characters of Antigone and Oedipus in Sophocles's Antigone . In this play, we see how an individual can be brought down by his or her own hauteur. Creon falls victim to his own pride and outrageous behavior, which leads to his ruin. He is the epitome of a king that is so blinded by his own power and authority that he cannot see the truth even when it is staring him in the face. In short, he is a stubborn man who refuses to listen to anyone that offers him a different opinion. While it can be said that Antigone is also stubborn and guilty of outrageous behavior, it should be noted that her motivations are completely different and this is why she cannot be compared to Creon. Antigone is stubborn for reasons that have nothing to do with her while Creon is stubborn because he wants everything to be all about him. ...read more.

In fact, it is safe to assume that her behavior was fueled by love and respect. She is compelled by things that seem to be opposite to things that compel Creon. She is not concerned about her place in society or about her reputation. She is, however, concerned about doing the right thing, even if it means her own death. It is also worth noting that Antigone dies with a self-respect, which is something Creon does not gain owing to how he acted. She is committed like Creon but for purely unselfish reasons. We see this when she tells her sister Ismene, "I will bury him myself. / And even if I die in the act, that death will be a glory" (Sophocles 85-6). While Antigone admits that she is defying the law, she has something greater on her side: which is truth. In this sense, we can see how the truth cannot be stopped. Antigone even admits her guilt, telling Creon, "I did it. I don't deny a thing" (Sophocles 492). Besides, she is not afraid of the consequences. She even dares to tell Creon that "his doom will be her precious little pain . ...read more.

Stubbornness brands you for stupidity-pride is a crime. (Sophocles 1132-37) His message is quite clear, however Creon responds, "Old man-all of you! So, you shoot your arrows at my head like archers at the target" (Sophocles 1144-45). Creon completely rejects the advice and unwisely sees Tiresias as an enemy. Both Haimon and Tiresias speak words that Creon does not want to hear, not because they are wrong but because acknowledging them would prove that Creon was mistaken about his position. Creon is far too arrogant to simply be persuaded by logic; in his eyes he is king and as such everyone should accommodate him. Right and wrong have long left Creon's vocabulary and his statements at the end of the play confirm this. In conclusion, Antigone is a play about two individuals who share a common characteristic: they are both stubborn. Creon is stubborn and arrogant because he is king. He lets the fact that he is king prevail over all other arguments. He is full of love for himself. Antigone is stubborn as well, but she is motivated by love and compassion for her brother. These two characters illustrate diametric views of the same human condition. They illustrate how hubris can be both positive and negative characteristics. Both instances result in tragedy but one proves an honorable death is more desirable than an arrogant one. ...read more.