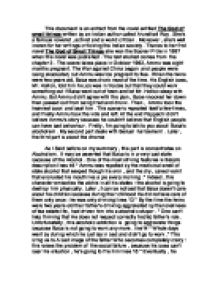 Analysis of an extract from Chapter 3 of Arundhati Roy's &quot;The God of Small Things&quot;.

This document is an extract from the novel entitled The God of small things written by an Indian author called Arundhati Roy . She's a famous novelist , activist and a world critizen . Moreover , she's well known for her writings criticizing the Indian society . Thanks to her first novel The God of Small Things she won the Booker Prize in 1997 when this novel was published . The text studied comes from the chapter 3 . The scene takes place in October 1962, Ammu was eight months pregnant. The War against China began and people were being evacuated, but Ammu was too pregnant to flee . When the twins were two years old, Baba was drunk most of the time. His English boss, Mr. Hollick, told him his job was in trouble but that they could work something out if Baba went out of town and let Mr. Hollick sleep with Ammu. But Ammu didn't agree with this plan , Babe knocked her down then passed out from being tired and drunk . Then , Ammu took the heaviest book and beat him . This scenario repeated itself a few times, and finally Ammu took the kids and left. At the end Pappachi didn't believe Ammu's story because he couldn't believe that English people can have bad behaviour . ...read more.

after he(it) beats her again . '' When he regained consciouness , he was puzzled her about helping with his transfer .'' this passage points out the Drunken Violence which damages their lifes In my second part I'll talk about the s****l harrasment which is a key-issue in this text . Firstly i'm going to define what s****l harrasment is : submission to such conduct is made either explicitly or implicitly a term or condition of an individual's employment . . I'm very much impressed by what the narrator said lines 38 , this is proves that Mr Hollick abuses of his power because he had s*x with several women ( employees ) '' Already there were a number of ragged , light skinned children of the estate that Hollick had bequeated on tea pickers whom he fancied . This was his first incursion into management circles '' . It goes without saying that Mr hollick is going to do the same idea with Baba's wife because he is not far (firing) this one . I notice that lines 30 Mr Hollick makes advances to Baba : he would like to have s*x with his wife . If baba doesn't agree with his boss he will be fire ' You're very lucky man , you know wonderful family , beautiful children , such an attractive wife . ...read more.

To conclude the topic of the text is to show Baba's Alcoholism . This problem is going to engender accumulations which is going to urge Ammu to leave him . Indeed , his boss asks to sleep with his wife for not to fire him .It can't be taken for granted that the author denigrates the fact That Hollick abuses his boss's power to be able to make love with the employees . What prevails in the text is that Ammu is brave because she left her husband to have a better life and to protect her children of their father who is nasty and always filled . As far as the main character is concerned i learnt at the end that she came back home and she told her father the situation with Baba which is pitiful . But , the last lines show that Pappachi doesn't agree with his daughter , he gives reason to his son-in-law because he is english . According to Pappachi english people are all gentleman '' Pappachi would not believe in her story not becausehe thought well of her husband , but simply because he didn't believe that an Englishman , any Englishman , would cover another man's wife " My first impression is that It is incredible that an Indian who knew the British colonization reacts like that : He worked for the British . He was subjected to the British and he prefers to be agree with a British that of his daughter . ...read more.