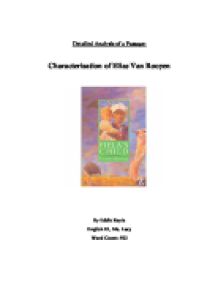 Detailed Analysis of a Passage: Characterisation of Elias Van Rooyen By Eddie Royle English Hl, Ms. Lacy Word Count: 923 Everyone has tried at least once to hide his or her emotions. Elias Van Rooyen attempted to hide just this. However, he conceded to three stages of grief: denial, anger, and acceptance. Throughout the passage, Elias projects a fondness towards Lukas, shown through his shocked behaviour on Lukas's departure. While Elias waits for Lukas's arrival, he has an on going struggle with himself, whether or not Lukas will return. On the first day, Elias impatiently waits to see Lukas. The author, Dalene Matthee shows Elias's increasingly worried grapple on where Lukas is. "If someone had told him Lukas would go like that, he would have told that person to his face that he was a liar". The author did not even show Elias questioning where Lukas was, but instead had Elias starting to deny what might have happened, "Not Lukas... ...read more.

Elias explored all the different possibilities to what was keeping Lukas, "Perhaps he could not find Nina". Elias was still trying to stay strong and optimistic, but was showing signs of vulnerability. By using the word "perhaps" he is trying to comfort himself, suggesting the good outcomes. The author uses parallel structure to further express Elias's denial and growing worry, "Perhaps he had tried to take a shortcut and got lost, or perhaps the elephants had chased him". Elias explores every possibility that is available, the elephants chasing him, and Lukas getting lost. By listing the things that could have happened the reader can see Elias's anxiousness, and again his denial, because he does not suggest if Lukas maybe is not coming back. Again by using "perhaps" Elias questions himself. When Elias finally hears the news of Lukas not returning, the author shows his anger through dialogue. When Nina breaks the news to Elias he keeps asking, still in disbelief, "Where did you hear that?" ...read more.

Elias at the very end of the passage accepts Lukas's departure from the forest, "it was true". The use of the short sentence implies a sad tone, while Elias's struggle with the truth comes to an end, he feels hurt, but he accepted it. The author in a way wants the reader to feel affection towards Elias, by explaining his grief, in different emotional states, by the end; you can feel Elias is sullen and almost defeated. Elias adds at the end, "Only God in heaven knew what she would bring upon them next". Elias is referring to the news Nina always brings, but he also feels he has been hard done by, and almost acts like he is giving up. This passage is significant because it reveals deeper insight to Elias's character and his love for Lukas. Through Elias's thoughts, actions and dialogue the reader step by step sees Elias's grief process: denial, then anger and lastly acceptance. Because Elias is so hurt and angered the reader can see, Elias developed a certain fondness towards Lukas. ...read more.