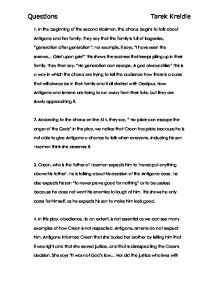 Antigone. In this play, obedience, to an extent, is not essential as we can see many examples of how Creon is not respected. Antigone, Ismene do not respect him.

1. In the beginning of the second stasiman, the chorus begins to talk about Antigone and her family. They say that the family is full of tragedies, "generation after generation". For example, it says, "I have seen the sorrows... Grief upon grief" This shows the sadness that keeps piling up in their family. They then say, "No generation can escape. A god always strike" This is a way in which the chorus are trying to tell the audience how there is a curse that will always be in their family and it all started with Oedipus. Now Antigone and Ismene are trying to run away from their fate, but they are slowly approaching it. 2. According to the chorus on line 614, they say, " No pride can escape the anger of the Gods" In the play, we notice that Creon has pride because he is not able to give Antigone a chance to talk when everyone, including his son Haemon think she deserves it. 3. Creon, who is the father of Haemon expects him to 'never put anything above his father'. ...read more.

Therefore obedience, in a way is essential. 5. He reveals in these pages how oppressive he is towards woman. He is arrogant to the point of being s****t. He will not even listen to what Antigone has to say because he is certain that a woman cannot beat a man. He says, "I will not be beaten by a woman. I f we must lose, let it be to a man" This then shows, his fear to arguing with Antigone who could be backed up. He feels that she is making sense, so to make him win or to stop her from talking truth, he says woman can't beat men to finish this case. 6. Haemon is telling his father that the men of Thebes are all different. Some are very intelligent and some aren't. He is trying to tell him that some of them grieve for Antigone and to stop them from being "afraid to say thing that would annoy" him, he must be open-minded and acknowledge that others are able to teach him something. ...read more.

He also accuses him of taking side with Antigone as he opens the subject of divine law. After he says that his father is "trampling on divine law", his father replies by saying " Your mind is poisoned. You have given it to a woman." 10. If Creon sentences Antigone to death he threatens to kill himself as he says, " Then she must die. But her death will only bring another death." He also tells his father that it is not a threat but what he desires. He probably does this in order to wake up his father from what he is doing. 11. Creon plans to kill Antigone in a cave in a deserted place and he sarcastically tells the chorus to let "her pray to the only God that she honors- the God of death. Maybe he can save her. Creon is mixing the story up, by believing his own lies. He knows that she honors the dead, not the God of death. He knows that she also honors Zeus who is the main God. Lastly he knows that she is not going to pray to live as chose the path of death. Questions Tarek Kreidie ...read more.