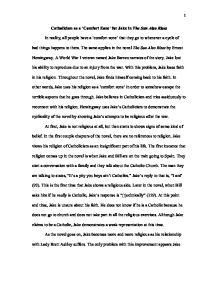 Catholicism as a 'Comfort Zone' for Jake in The Sun Also Rises In reality, all people have a 'comfort zone' that they go to whenever a cycle of bad things happens to them. The same applies in the novel The Sun Also Rises by Ernest Hemingway. A World War I veteran named Jake Barnes narrates of the story. Jake lost his ability to reproduce due to an injury from the war. With this problem, Jake loses faith in his religion. Throughout the novel, Jake finds himself coming back to his faith. In other words, Jake uses his religion as a 'comfort zone' in order to somehow escape the terrible aspects that he goes through. Jake believes in Catholicism and tries assiduously to reconnect with his religion. Hemingway uses Jake's Catholicism to demonstrate the cyclicality of the novel by showing Jake's attempts to be religious after the war. At first, Jake is not religious at all, but then starts to shows signs of some kind of belief. In the first couple chapters of the novel, there are no references to religion. ...read more.

For instance, after being angry at Robert Cohn, Jake goes to the cathedral by himself. He prays for a great number of people and events in his life. He prays for Brett, Mike, Robert, Bill and himself. He also prays for the bullfighters, the bull fights and the fiesta hoping that all will turn out good. As he prays, he finds that he is, "getting sleepy" and as the prayer goes on, he refers to himself as a "rotten Catholic" (102-3). This entire passage demonstrates how Jake tries to be a good Catholic, but he cannot fully grasp the concept of being religious. By falling asleep, Jake has a lack of interest in what he does even though he thinks that it is the right thing to do. At the end of the passage, Jake says, "[Catholicism] [is] a grand religion, and I only wished that I felt religious" (103). By saying this, Jake admits that he knows that praying is the right thing to do, but at the same time he does not feel religiously touched by what he has just done. ...read more.

At this point, Jake is officially comfortable about being Catholic. Even though he told people he is Catholic, he now is involved in his religion. Jake has now regained his faith in God and is ready to tell people about it. In that same dialogue, he is even gives advice to Brett about praying. Not only does Jake declare that he is a Catholic, he also pushes Brett into having some kind of faith too. In the novel The Sun Also Rises, Jake Barnes' faith changes through the story. This change is cyclical because every time that Jake has a downfall with Brett or an argument with Robert Cohn, he goes to church. By going to church, Jake reclaims his faith close to what it was before the war. While overcoming all the bad things during the novel, the only thing that Jake thinks of turning to is Catholicism. So, the cyclicality is that every time that Jake is unhappy he feels the need to go to church and pray. Whenever something goes wrong for a person, that person always goes to his or her 'comfort zone' to sort everything out. Catholicism developed into Jake's 'comfort zone' and there he is able to survive his difficult life. ...read more.