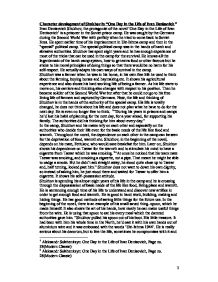 Character development of Shukhov in "One Day in the Life of Ivan Denisovich" Ivan Denisovich Shukhov, the protagonist of the novel 'One Day in the Life of Ivan Denisovich' is a prisoner in the Soviet prison camp. He was caught by the Germans during the Second World War with perfidy when he tried to come back to Soviet lines. He spent earlier time of his imprisonment in Ust-Izhma camp and then in the "special" political camp. The special political camp was in the hands of harsh and abrasive authorities. Shukhov has spent eight years and he has enough experience of most of the tricks that can be used in the camp for the survival. He knows all the legerdemain of the harsh camp system, how to get extra food or other favours but he sticks to his moral principles of doing things so that there would be no harm for his self-respect. He actually adapts his own ways of survival in the camp. Shukhov was a farmer when he was in his home, in his own free life he used to think about the farming, buying horses and haymaking etc. It shows his agricultural experience and also shows his hard working life of being a farmer. As his life starts to move on, his carriers and thinking also changes with respect to his position. ...read more.

He could conceive of no immediate use for it, but then you can never tell what you might need in the future. So he picked it up and slipped it into his knee-pocket. ... Thrift is better than riches." It shows his possession of collecting things and his concern for the future and his life. He always hides his trowel which he took from the machine room once and has been successful to hide it. He hid it because it helps him to work comfortably with good one tool. Spoon, hacksaw blade, trowel etc. these things seems to be small, physically but for Shukhov, these things are treasure for him which helps him to live his hard life in the harsh camp. He is also very concerned about not to waste the things. 4"Wasn't it enough that Tiurin had told them not to bother about the mortar? ........ But Shukhov wasn't made that way: eight years in a camp couldn't change his nature. He worried about anything he could make use of, about every scrap of work he could do- nothing could be wasted without good reason." Shukhov is living there, where there is no importance of individuality, independence, humanity. Even then, he managed to maintain his individuality, self- respect, sense of honour, helping nature and other humanitarian values. ...read more.

Although the introduction to this essay seems promising and based on fact, the body and conclusion are badly argued and render the essay superficial and lacking in analytical insight. The essay starts off on a very concrete note, giving the ...

Although the introduction to this essay seems promising and based on fact, the body and conclusion are badly argued and render the essay superficial and lacking in analytical insight. The essay starts off on a very concrete note, giving the characterÃ¢â‚¬â„¢s background; however, the author could have included less facts and more introductory words that relate directly to the topic; indeed, he could have steered the general theme towards a more specific argument. This would have automatically guided him towards a more specific response, rather than making the essay as vague as it is. After the introduction, the overall structure is clear, precise. Unfortunately, the contents do not quite match it; the response is suffused with examples and quotes, while the analysis that is essential to an essay on this level vanishes. This gives the essay rich potential, but it has not been developed, which means that the form, rather than content, guides the essay Ã¢â‚¬â€œ and as such, there is no clear line of argument, but rather a descriptive account of what the protagonist has been experiencing throughout the novel. Towards the end of the essay, the writer veers away from the aforementioned specific examples, which means that the conclusion resembles a grand, sweeping, yet hollow statement; we have not seen enough proof to make the conclusion valid!

The writer provides many examples, including quotations, to give a flow to the argument that the protagonist has, indeed, undergone a transformation. However, these examples are too straightforward and separated from each other, as if the entire middle of the novel had been omitted; this makes it impossible to see exactly how the transformation took place. All in all, the analysis, though competent and based on facts, is too superficial to make this essay excellent. Each of the examples should have been followed by a more analytical insight, rather than one, simple sentence, which reiterated the quote. On a similar note, the writer should have dived deeper into literary vocabulary and used it; this would have immediately made the analysis more precise.

The style is usually correct and the sentences and paragraphs organised into clear structures. However, the writer often seems to get lost in his own grammatical structures by not using enough punctuation or repeating words (e.g. Ã¢â‚¬Å“authorities who decide their life even for the basic needs of the life like food and warmthÃ¢â‚¬Â). This confuses the essayÃ¢â‚¬â„¢s arguments and sets a linguistic barrier in front of what could be a well-argued, concise piece of work. Moreover, the writer should not use colloquialisms such as Ã¢â‚¬Å“and so onÃ¢â‚¬Â, Ã¢â‚¬Å“actuallyÃ¢â‚¬Â. Having a more idiomatic, rather than dispassionate, attitude to the writing style might also raise the standard of the essay.