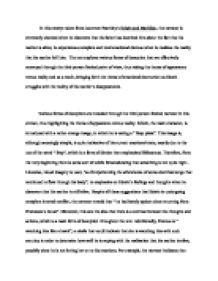 In this excerpt taken from Laurence Fearnley's Edwin and Mathilda , the narrator is extremely shocked when he discovers that his father has deceived him about the fact that his mother is alive; he experiences complete and total emotional distress when he realizes the reality that his mother left him. The text explores various forms of deception that are effectively conveyed through the third-person limited point of view, thus raising the theme of appearance versus reality and as a result, bringing forth the theme of emotional destruction as Edwin struggles with the reality of his mother's disappearance. Various forms of deception are revealed through the third-person limited narrator in this extract, thus highlighting the theme of appearance versus reality. Edwin, the main character, is introduced with a rather strange image, in which he is eating a " limp pizza". This image is, although seemingly simple, is quite indicative of his current emotional state, mostly due to the use of the word " limp", which is a form of diction that emphasizes lifelessness. Therefore, from the very beginning there is some sort of subtle foreshadowing that something is not quite right. . Likewise, visual imagery is used, "as if experiencing the aftershocks of some electrical surge that continued to flow through his body", to emphasize on Edwin's feelings and thoughts when he discovers that his mother is still alive. ...read more.

Also, this image is completely deceptive, since he appears to be mourning his wife, but in reality his "expression of loss" is due to her leaving. What is more, Edwin always believed his mother was dead but when he learns that she is alive and married at the same time, he experiences a great feeling of deception from both of his parents since they both lied to him. The excerpt ends with Edwin's discovery of his mother's deception, " Thomas. Her Husband. He was such a wonderful man.", but does not reveal his reaction. The final sentence is very effective and shocks the reader, and by doing so, it indicates the possible shock that Edwin is experiencing at that precise moment. All of these ideas about deception support the theme of appearance versus reality, and give rise to another theme as Edwin copes with these realizations of deception-emotional destruction. Edwin's feelings are shown through several literary elements to demonstrate his nervous breakdown and bring forth the theme of "emotional destruction". One of the literary elements the narrator uses is diction to show Edwin's emotional state; the narrator uses diction such as "limp" in the opening of the excerpt to describe Edwin's lifeless state. In addition, Edwin's brain is displayed as "buzzed" from the shocking information he receives about his mother. Similarly, Edwin thinks "bitterly" of his father when he discovers about his lies; this shows how Edwin feels anger towards his father after discovering the deception. ...read more.

He feels even more betrayed when he discovers that he has sisters and this is shown through the repetition of the statements "I was her child first - I had her first" to emphasize on these feelings of betrayal towards his mother. The fact that he's repeating these phrases and that he's persistent on the fact that he had her first, really shows how he's continually descending into complete emotional destruction. This emotional turmoil is further shown through figurative language and diction when the narrator describes that " a wave of pain washed over him" and that " he wanted to protest. Finally, we realize that Edwin's discovery of several facts about his mother and his father throw him into a state of complete internal chaos and bring forth his emotional destruction. The fact that his reaction to a final piece of shocking news at the end of the excerpt, "Thomas. Her husband. Her was such a wonderful man." Is not even shown is indicative of the fact that perhaps he will be completely and totally shocked and lost for words, indicated the final blow to his emotional state. In conclusion, the use of the third-person limited perspective is quite effective in that sense that it focuses only on Edwin's thoughts, thus allowing readers to contrast between appearances versus the reality of those appearances and successfully putting forth the theme; the point of view is also quite essential in focusing on Edwards inner thoughts and emotions only, so that the readers can fully experience the extent of his emotional breakdown. ?? ?? ?? ?? ...read more.