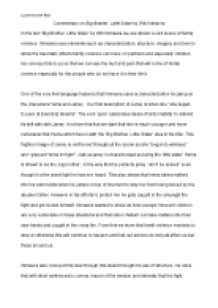 ﻿Louie Harden-Bull Commentary on Big Brother, Little Sister by Witi Ihimaera In the text ?Big Brother, Little Sister? by Witi Ihimaera we are shown a vivd scene of family violence. Ihimaera uses elements such as characterization, structure, imagery and tone to show the traumatic effects family violence can have on partners and especially children. He conveys this to us so that we can see the hurt and pain that will come of family violence especially for the people who do not have it in their life's. One of the very first language features that Ihimaera uses is characterization focusing on the characters Hema and Janey. Our first description of Janey is when she ?she began to peck at [Hema?s] dreams?. The verb ?peck? associates ideas of birds inability to defend its self with with Janey. ...read more.

Ihimaera wanted to show us how younger innocent children are very vulnerable in these situations and that older childern can take matters into their own hands and caught in the cross fire. From this we learn that familt violence neededs to stop ot otherwise this will continue to happen and that out actions do not just affect us but those around us. Ihimaera also conveys this idea through this ideas through his use of structure. He odes thdi with short sentences to convey mauch of the tension and intensity that the fight has. This is apparent when ?there was the sound of a crash, Hema sat up? This instantly changes the pace of the text to replicate the increased heart rate of all who are involved. ...read more.

This creates a dark abusive tone which reinforces the violent, hostile tone the goes to explain the fear that the children are feeling. The tone expresses the trumatic and violent nature of house holds that we are shown. The text shows us this so that we can gain an understanding of what it is like to be in such a situation and what some people go though. I makes it clear to us that something needs to be done it we want to stop the cycle. To conclude ?Big Brother, Little sister? is a heart wrenching story of a family violence. Witi Ihimaera his use of characterisation, structure, imagery and tone fully convinces of the reality of the scene. Witi Ihimaera being of Maori decent wants to make us aware of how people are affected by family violence in New Zealand. ...read more.