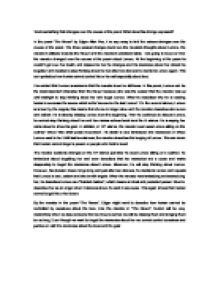 On the second stanza, Lenore is known by the angels, this means that she is no longer alive and the narrator describes she is rare and radiant. He is already missing Lenore from the beginning. Than he continues to discuss Lenore, he cannot stop thinking about her and her names echoes back from the 5th stanza. He is saying her name aloud to show his grief. In addition, in 13th stanza, the narrator even sees Lenore sitting on the cushion where "she shall press nevermore". He starts to see fantasizes and memories of where Lenore used to be. Until last few stanzas, the narrator describes the longing of Lenore. ...read more.

When the narrator was fantasizing and memorizing her, he describes Lenore as a "Sainted maiden", which means an ideal and perfected person. Now he describes her as an angel when 2 stanzas above he said it was curse. This again shows that Human cannot forget his or her lovers. By the narrator in the poem "The Raven", Edgar might want to describe how human cannot be controlled by ourselves about the love. Like the narrator in "The Raven", human will be very melancholy when we lose someone that we have loved but we will be missing them and longing them for so long. Even though we want to forget the memories about her we cannot control ourselves and just live on with the memories about the lover and the grief. ...read more.