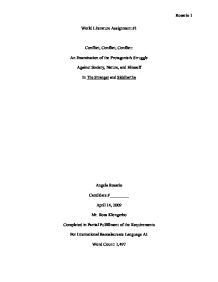 World Literature Assignment #1 Conflict, Conflict, Conflict: An Examination of the Protagonist's Struggle Against Society, Nature, and Himself In The Stranger and Siddhartha Angela Rosario Candidate #_________ April 14, 2009 Mr. Ross Klongerbo Completed in Partial Fulfillment of the Requirements For International Baccalaureate Language A1 Word Count: 1,497 Throughout a person's life, one usually encounters numerous forms of adversity instigated by others, their surroundings, and his or herself. It is these encounters which allow a person to obtain a deeper understanding of his or her over-all purpose in life, sometimes referred to as the "hour of consciousness" or the "hour of [...] enlightenment" (Camus, "The Myth of Sisyphus" 89; Hesse 34). This notion remains true within Albert Camus' The Stranger and Hermann Hesse's Siddhartha as the protagonists of each novel journey towards self-discovery. The protagonist in The Stranger has to come to terms with his life in order to reach the "hour of consciousness." In Siddhartha, the protagonist must overcome the thirst for knowledge along his journey towards the "hour of [...] enlightenment." In both works, the protagonists of the novels are forced to struggle through various life-altering conflicts within society, nature, and themselves in order to reach the point at which they reach full understanding of the meaning and purpose of their lives. ...read more.

Meursault experiences his first existential moment while at the beach as the sun's brutal force causes him to awaken from a lifetime of living in the moment and realize the repercussions of his actions. While at the beach Meursault gets involved in a confrontation with an Arab. Although Meursault realizes that killing the Arab will bring about numerous ill-fated consequences, he is unable to make a positive decision due his many years of going with the flow of life (Camus, The Stranger 58). The sun's harsh blinding and disorientating effects also lead Meursault to kill the Arab despite his reservations. Meursault is overwhelmed because "the whole beach, throbbing in the sun, [i]s pressing on [his] back [...and] the sun [i]s starting to burn [his] cheeks [...] It [i]s this burning, which [...] ma[kes Meursault] move forward" and kill the Arab (Camus, The Stranger 58-59). While this beach encounter leads to Meursault's downward spiral, it also brings him closer to self-knowledge and "the hour of consciousness" because his decision serves to change the direction of his life. After suffering and straying from the path to enlightenment for so long, Siddhartha is able to learn some of the most important lessons in life upon his departure from the town. ...read more.

He realizes that with each person he becomes along his spiritual journey, he comes one step closer to enlightenment by obtaining the knowledge specific to each different person. As Siddhartha learns, the Buddha is essentially a part of everyone and his ability to discover his Self so many times allows him to finally reach his "hour of [...] enlightenment" (Hesse 147-152). Throughout the novels The Stranger and Siddhartha, the protagonists are forced to come to terms with their innermost thoughts and emotions. Meursault has to deal with his mother's death, relationships with others, and own views on life in order to discover the purpose of his life. After reaching the end of his days, Meursault is finally able to take responsibility for his actions, make sense of his life, and reach the "hour of consciousness." Siddhartha is forced to suffer through the thirst for knowledge as he strives to discover his true Self. Along the way, Siddhartha follows a variety of paths before realizing that they all lead to the same thing, to enlightenment. Siddhartha learns that, regardless of class or status, the Buddha is a part of everyone. It is this knowledge which allows Siddhartha to finally reach the "hour of [...] enlightenment." Although Meursault and Siddhartha differ in their lifestyles, they both are able to reach a full and final understanding of themselves and their place in the world. ...read more.