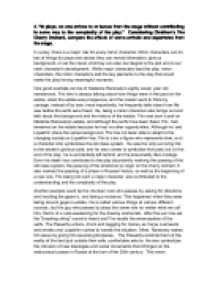 Considering Chekhovs The Cherry Orchard, compare the effects of some arrivals and departures from the stage.

3. "In plays, no one arrives to or leaves from the stage without contributing in some way to the complexity of the play." Considering Chekhov's The Cherry Orchard, compare the effects of some arrivals and departures from the stage. In a play, there is a major role for every minor character. Minor characters can do lots of things for plays and stories they can reveal information, give us background, or set the mood. And they can also be integral to the plot and to our main character's development. While major characters lead the play, minor characters, the minor characters add the key elements to the play that would make the play having meaningful moments. ...read more.

Although he and Lopakhin share the same background, Firs has not been able to adapt to the changing society as Lopakhin has. Firs is also a figure who represents time, and a character who symbolizes the old class system. He was the only surviving link to the estate's glorious past, and he also comes to symbolize that past, but at the end of the play, he is accidentally left behind and he presumably dies onstage. Even his death has contributed to the play abundantly marking the passing of the old class system, the passing of the aristocracy's reign on the cherry orchard. It also marked the passing of a phase in Russian history as well as the beginning of a new one. ...read more.

After the sun has set, the "breaking string" sound is heard and Firs recalls the emancipation of the serfs. The Passerby enters, drunk and begging for money as Varya overreacts and shrieks and Lopakhin rushes to handle the situation. Mme. Ranevsky makes him leave by giving him several gold pieces. The Passerby reminds them of the reality of the land just outside their safe, comfortable estate. He also symbolizes the intrusion of new ideologies and social movements that infringed on the aristocracy's peace in Russia at the turn of the 20th century. This minor character, who barely comes in for half a page went off stage by adding something which told a lot about the play. The addition of making them realise about the reality of the land outside the estate, and further adding to the complexity of the play. ...read more.