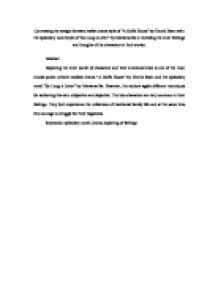 Contrasting the straight forward realist drama style of &quot;A Doll's House&quot; by Henrik Ibsen with the epistolary novel style of &quot;So Long a Letter&quot; by Mariama Ba in revealing the inner feelings and thoughts of the characters in their stories.

Ramatoulaye admits that when a woman in the African muslin world gets married, she sells herself in slavery to the family of her husband - she is not even allowed to pay the bills by herself or go somewhere out without her stronger part. This is how Ramatoulaye speaks of marriage : "This is the moment dreaded by every Senegalese woman, the moment when she sacrifices her possessions as gifts to her family-in-law; worse still, beyond her possessions she gives up her personality, her dignity, becoming a thing in the service of the man who has married her, his grandfather, his grandmother, his father, his mother, his brother, his sister, his uncle, his aunt, his male and female cousins, his friends." Although there are no such strict rules in European society of Ibsen's "Dollhouse", Nora suffers from the same feeling of deprivation, understanding the enormity of hypocrisy and insincerity that surround her. The petty care of her husband Helmer, who never speaks to her seriously, without sugary jokes or moralizations, makes her a favorite puppet but not a human being. For that reason Nora is associated in the play with a Christmas tree, as she is only a charming plaything in the household. But the crash of family life does not turn out to be the crash of their lives, they learn to be strong, to provide for themselves and, what is even more important, they discover their own personality and want to develop it. ...read more.

They are surrounded by female friend who inspire them in their struggle. For Ramatoulaye it is her childhood friend Aissatou, who had courage to divorce her husband Maudo after he had taken a second wife. For Nora this is Christine Linde, who abandoned poor and miserable Krogstar in order to search for better life. However, Nora and Ramatoulaye are not that much radical in their views as their friends. They are only on the way to establishing their place in life, and the family misfortune is only a new turning point in their lives. Conclusion: The description of feelings in the piece of literature can be done in a great number of possible ways according to the structure and genre of the work. The author can either penetrate in the inner world of the character itself, being able to fix his/her thoughts and reminiscences, show the feelings and emotions of a person through the eyes of other characters of the story, or make readers guess it from the action and development of the plot. Although realist drama "A Doll's House" by Henrik Ibsen and the epistolary novel "So Long a Letter" by Mariama Ba make use of different ways of depicting character's emotions, their effect on the reader is in both cases very strong. It is due to its sensuality that these pieces of work aroused great discussions in their societies at the time of their publishing. Only strong and convincing writing can produce such an effect. ...read more.