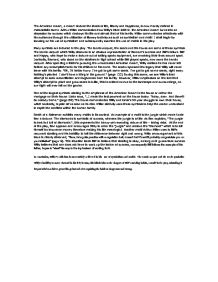 Death of a Salesman. Many symbols are included in the play. The tennis racquet, the seeds and the house are some of these symbols.

The American dream, a dream derived the ideals of life, liberty and happiness, is now merely defined in materialistic terms. Arthur Miller demonstrates how w***y's blind faith in the American dream turns into an obsession for success which destroys his life and almost that of his family. Miller communicates effectively with his audiences through the utilisation of literary techniques such as symbolism and motif. I shall begin by focusing on his use of symbolism and subsequently examine the use of motifs in the play. Many symbols are included in the play. The tennis racquet, the seeds and the house are some of these symbols. ...read more.

During this scene, we see w***y's final attempt to seek reconciliation and forgiveness from his family. However, Miller emphasizes on the fact that w***y's attempt to plant and grow seeds is futile, this is evident as due to the landscape and surroundings, no sun-light will ever fall on the garden. One of the largest symbols relating to the emptiness of the American Dream is the house or rather the mortgage on their house. Linda says, "...I made the last payment on the house today. Today, dear. And there'll be nobody home." (page139) The house demonstrates w***y and Linda's 35-year struggle to own their house, which ironically, is paid off as soon as he dies. ...read more.

w***y encouragement of this issue is clearly observed, "Sure, he's gotta practice with a regulation ball, doesn't he? Coach'll probably congratulate you on your initiative!" (page 19). This situation leads Biff to believe that stealing is okay, as long as it guarantees success. w***y believes that one does not have to work up the ladder of success, consequently Biff follows the example of his father, hopes to "steal" his way to the top instead of working for it. In conclusion, Miller's criticism is successfully achieved in his use of symbolism and motifs. The tennis racquet and the seeds symbolise w***y's inability to move forward in his life; in turn, this blinds him to the dangers of Biff's stealing habits, a motif in the play, mistaking it for potential to achieve great things instead of recognising the habit as dangerous and wrong. ...read more.

The student has identified the main symbols and motifs used in Death of a Salesman and drawn some relevant quotes from the play, yet the level of analysis fails to further expand their points. The conclusion does not draw together ...

The student has identified the main symbols and motifs used in Death of a Salesman and drawn some relevant quotes from the play, yet the level of analysis fails to further expand their points. The conclusion does not draw together their answer in a way that encompasses what has been discussed in the body paragraphs; the introduction, however, sets out the main ideas quite succinctly. It may be a good idea to reconsider the structure of this answer: the conclusion especially remains in need of further elaboration. The student summarises their previous points, but does not draw them together in a way which demonstrates their ideas have developed into a coherent understanding of how the symbols and motifs feed into overarching thematic concerns.

Although the basic symbolic function of the tennis racquet and seeds are supported by pertinent moments from the play, there needs to be another two or three sentences succeeding them which elaborate on how these symbols further Miller's central thematic concerns or aid characterisation. For instance, the student aptly identifies the way seeds that will never see sunlight figuratively reflect the futility inherent in the system, but rather than push the analogy to a further level of analysis, they remain on an essentially descriptive level. After identifying every symbol, the student would benefit from linking back to the premise they set out very well at the start: that the play argues the promises of the American Dream are founded on a harsh materialism that hides its unforgiving, cutthroat colours beneath ideals which innocent men like Willy place complete faith in, until their own ruin. The symbol of their house and the motif of the jungle feed into these ideological issues as well: the student has chosen to single out family dynamics as their primary function instead, which isn't incorrect, but it is somewhat simplistic. At this stage, some degree of secondary critical material would also be expected, of which there is none here.

The quality of writing is average - punctuation needs attention, indeed, it sometimes hinders the meaning the student is trying to convey in a sentence or two. Many quotes have been dropped into the prose as an isolated sentence, rather than being linked to what it is they demonstrate. These need to be introduced, then demonstrated to further the point the writer is trying to make, otherwise they remain isolated and arbitrary inclusions.