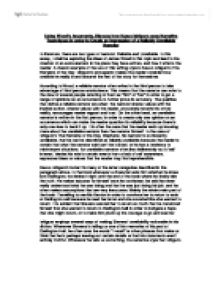 Using Wood's Arguments, Discuss how Kazuo Ishiguro uses Narrative Techniques in order to Create an Impression of a Reliably Unreliable Narrator In literature, there are two types of narrator: Reliable and Unreliable. In this essay, I shall be exploring the ideas of James Wood in this topic and lead to the creation of an extra element in the piece they have written, and how it affects the reader. A classic example of the use of this writing style is Kazuo Ishiguro's The Remains of the Day. Ishiguro's protagonist makes the reader consider how credible he really is and assume the rest of the story for themselves. According to Wood, a reliable narrator often writes in the third person to take advantage of third person omniscience. This means that the narrator can refer to the view of several people referring to them as "him" or "her" in order to get a range of opinions on an occurrence to further prove its accuracy. The qualities that define a reliable narrator are when: the narrator shares values with the implied author, shares values with the reader, accurately records his or her reality, encourages reader rapport and trust. ...read more.

Ishiguro employs several ways of making Stevens' unreliability noticeable in his diction. Whenever Stevens is telling us one of his memories of his past at Darlington Hall, he often uses the words "I recall" or other phrases that make us think that he is perhaps leaving out certain details or that his statements aren't entirely truthful. Whenever he tells us something, the narrative style that Ishiguro makes him speak in, is very digressive. Stevens holds certain details in order to construct a story to move away from the original point of his statement. "There are some very pertinent reasons why this memory has remained with me, moreover that come to think of it..." Ishiguro gives us a comparison to this narrative style in the character of Miss Kenton. Whilst Mr Stevens refers to his memories, we always see Ms Kenton's arguments using direct speech which is a much more effective tool when stating a point because more can be said to prove your point. "Your dustpan Mr Stevens, you've left it out here..." Ms Kenton's arguments are created in a much better way than Mr Stevens who is often left to denial "I have ...read more.

This shows a very large level of snobbery on Mr Stephens' part and that he only seems to listen to sense when the right person tells him. All in all, I believe that a reliable narrator is a character in a story who tells the story in a way that doesn't add up or makes the reader think as to what truly happens. We see this in Kazuo Ishiguro's The remains of the Day in the way Mr Stephens addresses us in reported speech in a very vague way. In this way, he is able to save face if he has done something that leaves him in a poor light. We also see an example of a reliable narrator in Ms Kenton whom speaks in direct speech which shows the accuracy of what she says and makes the reader trust in her judgements much more than the protagonist-Stephens. I believe that the effect of having an unreliable narrator in a story makes the reader take the initiative in what is happening in the story and think more independently as to what will happen next. A parallel story would be created when this happens, the narrator's version of events, and the reader's assumptions which tend to be more accurate. ...read more.