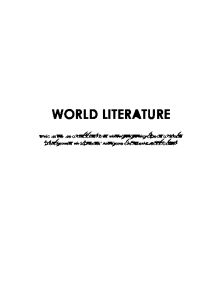 WORLD LITERATURE Discuss the use of character foils in highlighting aspects of female protagonists in Sophocles' Antigone and Ibsen's Hedda Gabler Both playwrights' characterisations of female protagonists are accentuated by the characterisation of their antithetical character foils. In Antigone, Sophocles uses Ismene - the ideally orthodox incarnation of ancient Greek women - to emphasize the unruly nonconformist in Antigone. In Hedda Gabler, Ibsen utilizes the conventional, compassionate and womanly Thea to play up the androgynous, callous and destructive tendency in Hedda. Sophocles straightaway establishes a divergence between the character foils by establishing their intentions in the first scene: Antigone's to "lift the body" against the King's "proclamation," while Ismene's to "obey those who are in power." Ismene opts to "obey those who are in power" meanwhile Antigone has a "hot heart for chilling deeds" and the "impossible." The audience are likely to interpret Ismene's yielding to authority as sensible and Antigone's "defiance of the law" as a ludicrous practice that violates the norm. Consequently, Ismene's circumspection only makes Sophocles' depiction of Antigone's rebellious manner more striking. Ismene's prudent and temperate intent enhances Antigone's uncontrollably disruptive and wilful scheme. Moreover, Ismene's shrewdness plays up the absurdity behind Antigone's wilfulness. Sophocles marks the polarity between Ismene's heedfulness and Antigone's imprudent disposition. While Ismene knows her duty not to "fight against men" or "overstep [her] bounds," Antigone insists on "plotting [the] burial" and breaking the King's "proclamation." ...read more.

Meanwhile, as Thea helps Lovborg to "[leave] off his old ways," Hedda taunts Lovborg into drinking the "full punch [glass]" and going to Brack's "wretched little party." Hedda's impulse to trigger an outbreak of Lovborg's dissolution seems even more intense next to Thea's altruism and beneficence. Moreover, Ibsen magnifies Hedda's lack of emotional fulfillment through means of his description of Thea's worthwhile pursuit of intimacy. Thea aspires to "live where Ejlert Lovborg is living" and therefore she is dissimilar to Hedda who finds it "unbearable" to "everlastingly" live with her own husband. Unlike Hedda who is dissatisfied with her man, Thea has some sort of emotional fulfillment. She has occupied herself with his book. She has gone into "mortal terror" of him succumbing to old habits. She itches to "be together" with him. Thea's emotional attachment inflates Hedda's apathy and deadpan disinterest. Placed alongside to Thea's compassion, her indifference is hyperbolized. Hedda's "steel grey, and cold, clear, and dispassionate" eyes are discernable as ever when she is compared to Thea. Hedda's propensity to lack interest, emotion, or vigour is magnified as her glum jadedness is contrasted with Thea's compassion. What's more, Ibsen's stage directions describe the two's physical appearances that symbolize their contrasting mindset, widening the divergence between them. The foils' hair is used as a conceit, a sensory description to appeal to the audience's visual perception, conveying their inherent mentality. ...read more.

Thea, when "couldn't bear it any longer," daringly emancipates herself - she "simply had to do what [she] did" and fearlessly she lets people "say what they please." In short, both dramatists encompass two antithetical female characters in their plays in a manner that inflates the divergence between two foils and the protagonists' disposition. By exaggerating this contrast, they accentuate the tension between their incompatible characters, dramatize their portrayals of society, presenting stimulating characterisations and thus render their plays compelling. Nevertheless, although dramatic potency is engendered, gripping the audience's attention, their theatrical depictions precipitate misinformation about the female community. By opting to focusing on only two representatives, both playwrights disregard the need for collective descriptions. Instead of illustrating a variegated assortment of women, the playwrights choose to display a limited and stereotyped scope of their societies. As Ibsen and Sophocles exhibit two extreme categories of women, an audience who observes the world on stage is fooled into believing that the female community of their societies consists of only women from either category. Both playwrights portray the two poles of society rather than the whole range, oversimplifying the female populace of their societies and pigeonholing their leading ladies as either assertively subversive or strictly unorthodox. Both plays are restricted to only two exemplifications of women while in actual, the female domain is much more varying. For this reason, although Ibsen and Sophocles' sensationalized plays leave powerful theatrical impacts, they contain neither diversity nor objectivity in their representations of the world. ...read more.