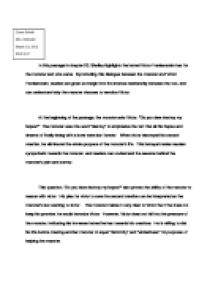 English Oral Commentary- Frankenstein. In this passage in chapter 20, Shelley highlights the hatred Victor Frankenstein has for the monster and vice versa.

In this passage in chapter 20, Shelley highlights the hatred Victor Frankenstein has for the monster and vice versa. By including this dialogue between the monster and Victor Frankenstein, readers are given an insight into the intense relationship between the two, and can understand why the monster chooses to terrorize Victor. At the beginning of the passage, the monster asks Victor, "Do you dare destroy my hopes?" The monster uses the word "destroy" to emphasize the fact that all his hopes and dreams of finally being with a lover were lost forever. When victor destroyed his second creation, he eliminated the whole purpose of the monster's life. This betrayal makes readers sympathetic towards the monster, and readers can understand the reasons behind the monster's pain and sorrow. This question, "Do you dare destroy my hopes?" also proves the ability of the monster to reason with victor. His plea for victor to save the second creation can be interpreted as the monster's last warning to victor. ...read more.

Find a wife for his bosom, and each beast have his mate, and I be alone?" This rhetorical question emphasizes the mistreatment of the monster by Victor. Victor had neglected and isolated the monster to the point where even a beast has a higher social class than the monster. This treatment from Victor inevitably caused the monster to hate Victor. Readers understand the extent of isolation the monster feels when he uses the word "man" to describe victor. It is clear at this point in the passage that the monster does not classify himself as man, proving his sense of isolation from society. Shelly then foreshadows future events in the novel through the words of the monster. "You may hate; but beware! Your hours will pass in dread and misery, and soon the bolt will fall which must ravish from you your happiness forever." This quote foreshadows misery and despair for Victor, as the monster promises to seek revenge and terrorize Victor. ...read more.

The monster is simply stating a fact, which foreshadows dark events to come; he is not trying to persuade Victor in any way. Although the literal meaning of this statement is clear, there are many interpretations to the monster's promise to be at Victor's wedding. After this statement is delivered to Victor, his mind becomes severely unstable. Victor is terrorized by the thought that the monster would kill him on his wedding day, which is of course the goal of the monster, who wants revenge due to his hatred for Victor. In summary, the immense hatred that Victor and the monster have for each other was highlighted in this passage. Through the use of diction, tone and foreshadowing, Shelley successfully illustrates to readers the extent of which the monster and Victor hate each other. This passage is significant in chapter 20, as it allows readers to better understand the complex relationship between creator and creation, which in turn helps with the understanding of the book as a whole. ...read more.