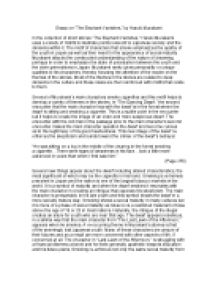 Essay on The Elephant Vanishes, by Haruki Murakami

﻿Essay on ?The Elephant Vanishes,? by Haruki Murakami In the collection of short stories ?The Elephant Vanishes,? Haruki Murakami uses a variety of motifs to illustrate points relevant to Japanese society and the divisions within it. The motif of characters that smoke emphasizes the apathy of the youth in Japan as well as their need for the appearance of social maturity. Murakami attacks the constructed understanding of the nature of dreaming, perhaps in order to emphasize the state of polarization between the youth and the older generations in Japan. Murakami rarely gives personality or unique qualities to his characters, thereby focusing the attention of the reader on the themes of the stories. Most of the themes in the stories are related to deep divisions in the culture and these ideas are then reinforced with motifs that relate to them. Several of Murakami?s main characters smoke cigarettes and this motif helps to develop a variety of themes in the stories. In ?The Dancing Dwarf,? the second encounter that the main character has with the dwarf is in the forest where the dwarf is sitting and smoking a cigarette. This is a subtle point in the encounter but it helps to create the image of an older and more suspicious dwarf. ...read more.

The dreams of characters in these stories are often not as surreal as the waking time. In ?The Dancing Dwarf,? the dreams that the main character has are the only times in which he can meet the dwarf. It is a strange contrast that a dreamed character becomes such a huge factor in his life and is responsible for what could be considered a near death experience. The conversation that the main character has with the old man also questions the validity of what is commonly understood to be a dream. Many of Murakami?s stories are dream-like in the way that they deal with conflicts that could not physically occur in the realm of this universe. The stories where dreams are actually occurring may attack this very notion of the other stories being surreal. In ?Sleep,? The main character states that he begins on what he describes as, ?My seventeenth day without sleep.? (74). This is of course completely impossible for a human being to accomplish assuming he is not studying at a United World College or something else ridiculous of that nature. Nonetheless, this issue as well as the conflicting realities from ?The Dancing Dwarf,? are questioning the premise of dreaming and sleep in general. ...read more.

This impatience has grown into a general apathy and a feeling of the people being distant from the culture and society itself. As the character from ?The Elephant Vanishes,? watches without any ability to intervene as his society?s old culture metaphorically vanishes away, the character from ?Lederhosen,? listens to a story of grand cultural epiphany from a distant and now apathetic position. The distance and apathy experienced by Murakami?s characters is a common thread through the stories that re-enforces the distance within Japan and the polarization of its culture and society. The polarization of Japanese society is presented through the many motifs in the stories of Murakami. The divisions in Japanese society are evident in politics, economics and the everyday life of Japan. Murakami presents the youth of Japan as a lost, rebellious generation in search of a purpose for their lives. He emphasizes their divide from a society, which has simultaneously lost interest in helping them. The characters of these stories are set up in near-surreal situations where they themselves have little unique significance. The lack of personality to the characters is balanced by the overbearing personality of the stories and creates the image of the struggling, modernizing, Japanese society that Murakami envisions. Jonah Berean ...read more.