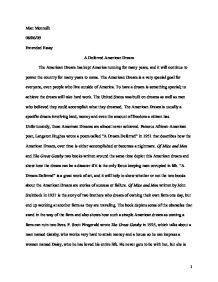 Extended Essay - A Dream Deferred Both Jay Gatsby from The Great Gatsby and George and Lennie from Of Mice and Men have their dreams crushed. According to Langston Hughess poem both of the dreams exploded and resulted in death.

Matt Monteilh 08/06/09 Extended Essay A Deferred American Dream The American Dream has kept America running for many years, and it will continue to power the country for many years to come. The American Dream is a very special goal for everyone, even people who live outside of America. To have a dream is something special; to achieve the dream will take hard work. The United States was built on dreams as well as men who believed they could accomplish what they dreamed. The American Dream is usually a specific dream involving land, money and even the amount of freedom a citizen has. Unfortunately, these American Dreams are almost never achieved. Famous African-American poet, Langston Hughes wrote a poem called "A Dream Deferred" in 1951 that describes how the American Dream, over time is either accomplished or becomes a nightmare. Of Mice and Men and The Great Gatsby two books written around the same time depict this American dream and show how the dream can be a disaster if it is the only focus keeping men occupied in life. "A Dream Deferred" is a great work of art, and it will help to show whether or not the two books about the American Dream are stories of success or failure. Of Mice and Men written by John Steinbeck in 1937 is the story of two brothers who dream of owning their own farm one day, but end up working at another farm as they are traveling. The book depicts some of the obstacles that stand in the way of the farm and also shows how such a simple American dream as owning a farm can ruin two lives. F. Scott Fitzgerald wrote The Great Gatsby in 1925, which talks about a man named Gatsby, who works very hard to attain money and a house so he can impress a women named Daisy, who he has loved his entire life. ...read more.

Everything seems to be going in the right direction for George, Lennie and Candy to eventually be able to buy this piece of land. Later in the story, when George goes to town with all the men on the ranch, Lennie is left back at the ranch with Candy and Crooks, a crippled black stable hand. Crooks is also disabled just like Candy. Lennie goes in the barn to see if he can keep Crooks company while the men are gone. Lennie forgets about George telling him not to talk to anyone about the dream, and he tells Crooks all about the farm. When Crooks hears about George, Lennie and Candy's dream, he tells Lennie that "[he had] seen hundreds of men come by on the road an' on the ranches, with their bindles on their back an' that same d**n thin in their heads. Hundreds of them. They come, an' they quit an' go on; an' every d**n one of 'em ever gets it. Just like heaven. Ever'body wants a little piece of lan'. I read plenty of books out here. Nobody never gets to heaven, and nobody gets no land. It's just in their head. They're all the time talkin' about it, but it's just in their head" (Steinbeck 74). Candy comes in to the barn to see if he could keep Crooks and Lennie company. When Candy comes in and finds out what Crooks and Lennie are talking about he reassures Crooks that they are closer then he was thinking to getting the piece of land. When Crooks hears this he starts to believe Candy, and he wants to be a part of the farm. Crooks said he will "come an' lend a hand" (Steinbeck 76) to help the men on the farm once they purchase it. So George and Lennie's dream is still rotting like the meat in Hughes's poem and attracting more people to it from the ranch where all the characters work. ...read more.

But they made no sound, and what [Nick] had almost remembered was uncommunicable forever" (Fitzgerald 111) Gatsby is also invited by Tom to come over to his house to be with him and Daisy. Gatsby joins them at their house and they decide to go to New York together because they are bored. Tom does not like the fact that Gatsby and Daisy are getting really close. Tom suggests that Daisy and Gatsby go in one car and that Nick, Jordan and he ride in another car. When they are in New York, Daisy confesses her true love for Tom and Gatsby is crushed. On the way back to Long Island, Daisy hits Myrtle who was running away from her house because she was unhappy with her life, and kills her. No one knew that Gatsby wasn't driving the car, but everyone assumes that he was driving. This leads to Gatsby's death ending his dream, as Myrtle's husband murders Gatsby because he believes that Gatsby killed his wife. Gatsby's dream explodes and does not come true. It sagged like a heavy load all throughout Gatsby's life but he never was successful in achieving it. Both Jay Gatsby from The Great Gatsby and George and Lennie from Of Mice and Men have their dreams crushed. According to Langston Hughes's poem both of the dreams exploded and resulted in death. In both of these books the American Dream seems impossible because all of these men tried too hard to achieve their dreams. George and Lennie were very close to achieving their dream of one day owning a farm but ironically the farm where they worked at ruined the dream. Jay Gatsby's dream was crushed because he thought he could accomplish his dreams through money. At one point in both of the stories each character believed that the American Dream was going to be successful. They all were forced to defer their dreams and they ended up being miserable and unhappy. From this poem and these two books we can learn that the American Dream is very difficult to achieve. 1 ...read more.