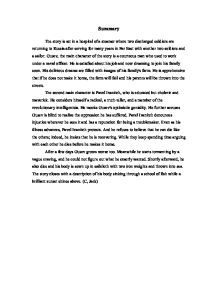 Gusev Analysis. Chekov brings up two ordinary characters that are suffering under the tyranny which was ruling the country that time. Gusev and Pavel Ivanitch clearly demonstrate human suffering and injustice.

Summary The story is set in a hospital of a steamer where two discharged soldiers are returning to Russia after serving for many years in Far East with another two soldiers and a sailor. Gusev, the main character of the story is a courteous man who used to work under a naval officer. He is satisfied about his job and now dreaming to join his family soon. His delirious dreams are filled with images of his family's farm. He is apprehensive that if he does not make it home, the farm will fail and his parents will be thrown into the streets. The second main character is Pavel Ivanitch, who is educated but choleric and maverick. He considers himself a radical, a truth-teller, and a member of the revolutionary intelligentsia. He mocks Gusev's optimistic geniality. He further accuses Gusev is blind to realize the oppression he has suffered. Pavel Ivanitch denounces injustice wherever he sees it and has a reputation for being a troublemaker. Even as his illness advances, Pavel Ivanitch protests. And he refuses to believe that he can die like the others; indeed, he insists that he is recovering. While they keep spending time arguing with each other he dies before he makes it home. After a few days Gusev grows worse too. Meanwhile he starts tormenting by a vague craving, and he could not figure out what he exactly wanted. Shortly afterward, he also dies and his body is sewn up in sailcloth with two iron weights and thrown into sea. The story closes with a description of his body sinking through a school of fish while a brilliant sunset shines above. ...read more.

Gusev is delirious with fever resulting from tuberculosis, so his mind slips in and out of the present reality in the course of the story. He comforts himself by imagining of snow and the cold in his home town. This shows Gusev's tendency to passively accept injustice and suffering. He preferred thinking about something else rather than confronting problems or protest about them. The method is successful within the limits of Gusev's narrow awareness. Instead of listening to Paul Ivanitch's bitter and contemptuous comments, Gusev daydreams about "the folks at home," with the result that "His happiness takes his breath away." He has no interest in the wider considerations of social injustice that captivate Paul Ivanitch. During his time as an orderly, Gusev obtusely did his job without thinking about whether it is fair, as Paul Ivanitch rails, to "Uproot a man from home, drag him 12,000 miles, give him tuberculosis," and make him the servant of some officer. Gusev is pure apolitical and he does not think about such matters like injustice. When Paul Ivanitch repeatedly tries to alert him to injustice, Gusev completely fails to understand what he is saying. Gusev's world is his bounded only with his family and his village. He worries about his drunken brother who beats his wife, and does not respect his parents. He worries about his brother's daughter, Akulka, sticking her legs out on the family sledge and getting frostbitten. He also worries about what will happen to the family after his death: he fears that the home will "go to rack and ruin" and that his parents will be thrown into street. ...read more.

He is already stuck in a sick-bay but does not stop wasting his breath. His words just vanish into the air giving no use at all, like the superfluous and meaningless as the canaries' songs. This implication is convinced by both men's deaths shortly afterwards. Symbolism "It was getting dark; it would soon be night." The very first line of the story suggests the deaths of Gusev and Ivanitch, convincing Chekhov's use of symbols. He uses subtle symbolism in order to give insights of his characters. The image of the eyeless bull's head that frequently enters Gusev's reverie symbolizes Gusev's somewhat primitive nature, and its eye-lessness suggests his lack of vision and understanding of the world around him. In addition the black smoke and clouds that drift into his consciousness is similarly suggestive of a fogginess of vision. The fact that the horse and sledge that plays such an important part in Gusev's reveries "no longer move ahead" when enveloped in the black smoke suggests the stagnation of the peasantry. Chekhov's skill in using symbolism is evident in the fact that both bull's heads and black smoke would be familiar sights in Gusev's village (real black smoke comes from a pottery chimney near his family home). Therefore the images have a naturalistic tone as well as symbolic value. Sometimes, the association of seemingly unrelated events is used symbolically to comment on the characters. "While they were sailing a big fish came into collision with their ship and stove a hole in it." Apparently this statement of Gusev does not make any sense but when it's deeply analyzed the writer has compared Gusev life which is sinking because of the devastation done by his masters. ...read more.