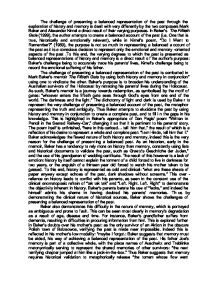 History and Memory: The Fiftieth Gate. In Bakers The Fiftieth Gate (1999), the author attempts to create a balanced account of the past (i.e. One that is true, historically and emotionally relevant), while in Kimels poem, Do I Want to Remember?

The challenge of presenting a balanced representation of the past through the exploration of history and memory is dealt with very differently by the two composers Mark Baker and Alexander Kimel a direct result of their varying purposes. In Baker's The Fiftieth Gate (1999), the author attempts to create a balanced account of the past (i.e. One that is true, historically and emotionally relevant), while in Kimel's poem, "Do I Want to Remember?" (1989), the purpose is not so much in representing a balanced account of the past as it is a conscious decision to represent only the emotional and memory-oriented aspects of the past .To this end, the varying degrees to which the past is presented as balanced representations of history and memory is a direct result of the author's purpose: Baker's challenge being to accurately trace his parents' lives, Kimel's challenge being to record the emotional suffering of his father. The challenge of presenting a balanced representation of the past is combatted in Mark Baker's memoir The Fiftieth Gate by using both history and memory in conjunction" using one to vindicate the other. Baker's purpose is to broaden his understanding of the Australian survivors of the Holocaust by retracing his parents' lives during the Holocaust. ...read more.

His father Joe's memory is part of a collective whole, with the place names of Auschwitz and Treblinka metonymically serving to represent the shared memories of other survivors: "the next terrifying chapter jumped at him like a jack-in-the-box." Thus Baker suggests that memory requires historical validation to metaphorically release "the torrent whose flow went backwards into his darkest might." This metaphor serves to show the extent to which memory is an emotive force, Baker also using olfactory imagery in "pungent odour of fresh vomit and faeces" and aural imagery in "screaming sound of shots" to demonstrate the aspects of the past that historical record cannot present. Thus Baker deals with the challenge of presenting ag balanced representation of the past by amalgamating history and memory into one accurate representation of the past. This can be seen in the visit to Buchenwald with Joe, in which Joe's memory supplies some detail, while Baker's historical interjection provide other details. To this end, Joe provides the emotional responses ("a great noise. Hurrah!") while Baker verifies this with objective facts ("10:30am on 11 April 1945"). The triumph of truthful representation is presented in the Buchenwald Ball, where they "danc[ed], not there, but in spite of there, in defiance of then, in celebration of now, in memory of them." ...read more.

Very assured voice - Good focus on question Unfortunately, you begin Baker (after your treatment of the epigraph) most obscurely. The Pagis section is unclear and feels muddled/muddling. And its a rather minor way to start the text! This quickly gathers momentum, though and becomes far more effective Try to use the words "represent," "presentation" in conjunction with the specific "events," situations," "personalities" you're exploring in your examples Keep key words clear as part of your argument. Your second paragraph on Baker essentially ignores the idea of a "challenge." You end your treatment of the text in the next paragraph well. The poem is treated very well and the links to Baker are pertinent and illuminating. "Challenge" is lost. There appears to be no challenge for Kimel and this should have been stressed, further in relation to his thoughts about historical documentation/discourse. Would have gone 18 here -- got 17. ~~~ A thoughtful argument focussed on the question. Argument about Baker would have been even more sophisticated had you explored the spiritual dimension of the text a little more (you touch on it on p.1) A little more specificity about the connections between representation and meaning in the poem would also be nice. ...read more.