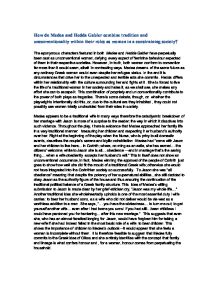 How do Medea and Hedda Gabler combine tradition and unconventionality within their roles as women in a constraining society?

How do Medea and Hedda Gabler combine tradition and unconventionality within their roles as women in a constraining society? The eponymous characters featured in both Medea and Hedda Gabler have perpetually been cast as unconventional women, defying every aspect of feminine behaviour expected of them in their respective societies. However, in truth, both women conform to convention far more than it would seem, albeit in contrasting ways. Medea dreams of the same future as any ordinary Greek woman would even despite her refugee status. In the end it is circumstances that drive her to the unexpected and terrible acts she commits. Hedda differs within her relationship with the culture surrounding her and fights at it. She is forced to live the life of a traditional woman in her society and hates it, as we shall see, she makes any effort she can to escape it. This combination of propriety and unconventionality contribute to the power of both plays as tragedies. There is some debate, though, on whether the playwrights intentionally did this, or, due to the cultural era they inhabited, they could not possibly see women totally unshackled from their roles in society. Medea appears to be a traditional wife in many ways therefore the cataclysmic breakdown of her marriage with Jason is more of a surprise to the reader; the way in which it dissolves into such violence. Throughout the play, there is evidence that Medea approached her family life in a very traditional manner: treasuring her children and respecting her husband's authority over her. ...read more.

There is one moment where she indulges in tempestuous conversation with Ejlert Lovborg however she still carefully maintains the appearance of respectability by wearing the fa�ade of two friends perusing a photo album. In contrast, Medea is totally unafraid of scandal. Whilst Hedda's only conventional trait is her fear of social disapproval, Medea was completely ready and willing to take on the role as a traditional wife in order to please Jason. Given this attitude, then, one would imagine that Medea a very meek and submissive figure. However, this is not so as when love turns to hate after Jason's betrayal, as she volunteered herself into this role she has total power to break away from it. It becomes clear when she says, "Love, did you say? It is a mighty curse." This is the first time we begin to see the cracks in Medea's marital bliss with Jason. When she begins to contemplate killing Creon and his daughter, an act no respectable Greek woman would even consider, we see her complete lack of fear of scandal. She says, "(Creon) lets me stay one extra day, to make three enemies corpses: ha! father, daughter, and my husband" Her greatest worry is for her own physical safety, which is assured by her extraction of a promise of sanctuary from King Aegeus. There is only one fear that Medea has which even resembles a fear of scandal and that takes the form of the totally masculine fear of humiliation before one's enemies: the only thing men were truly afraid of in Greek society. ...read more.

He said himself that he had to know his characters through and through before he could begin writing as was stated in an interview for The Humanitarian in January 1987. He said, "Before I write down one word, I have to have the character in my mind through and through. I must penetrate into the last wrinkle of his soul." It would therefore appear that Ibsen's plays have always been driven by the characters as opposed to the plot, and all the events within the plot are a direct result of the natural progression of the storyline due to the personalities of the characters. The story of Hedda Gabler is totally driven by Hedda's internal conflict between her great longing - breaking the restrictive shackles of society - and fear of social condemnation. Therefore, it would appear that Ibsen deliberately crafted her character to be a cess pit of battling emotions in a maelstrom of resentment. Medea and Hedda Gabler both manage to combine traditional and untraditional aspects of their roles as women, albeit in distinct ways. For Hedda, the end is bleak and tragic as she is trapped and defeated by the social constraints she wants so desperately to defy, whilst in the meantime Medea uses her social role to her advantage, exploiting the degrading position in puts her in to achieve her final victory. Euripides made the mythical murderess Medea somewhat traditional because it would make her character worthy of the audience's pity, while Ibsen made Hedda a character torn in an internal battle between tradition and rebellion because he was intrigued at the aftermath this dual nature would create. ...read more.

This world literature essay on Medea and Hedda Gabler is well-written and focused into comparing the novels with respect to the ability of the eponymous female characters to mix tradition and unconventionality within their roles as domineering women in a ...

This world literature essay on Medea and Hedda Gabler is well-written and focused into comparing the novels with respect to the ability of the eponymous female characters to mix tradition and unconventionality within their roles as domineering women in a constraining, male-dominated, chauvinistic society. The introductory paragraph is aptly placed to introduce the essay topic, introduce the works discussed, shortly comment on the skeletal framework of the essay and mention lightly the cultural context of the works. In subsequent paragraphs, the writer discusses the characterization of Hedda and Medea with respect to the novels. While this is done separately, the writer manages to create links within each point to establish a comparative perspective, which is something markers look out for. The writer uses numerous quotations to justify the interpretations, which enhances the quality of the report. Throughout the report, the writer inserts information about the context of the texts, especially the role and treatment of women in the past and then links to the text to show the constrained positions of Hedda and Medea. Hence, the writer has definitely answered the question to a certain extent.

The writerÃ¢â‚¬â„¢s depth of analysis is competent yet moderate for many reasons. Firstly, the use of quotations to interpret the text and justify this interpretation is apt. Secondly, the use of cultural details on the societal context and background of the novels to provide insight into the texts is notably done. Thirdly, the interpretation of audience reaction to what is happening in the texts is essential and the writer manages to include this throughout the text. Fourthly, the use of details on literary aspects of the dramas is evident, especially in the use of details on diction, language, characterization and thematic ideas. Of course, the interpretation of characterization is significantly important to this essay specifically, and to suit this, the writer manages to interpret not just the characterization, but is able to compare the techniques and depth of the characterization. On a higher level, the writer also links this to the thematic ideas if the text. However, there are also some lapses in the level of analysis. For example, the writer scarcely mentions the use of literary devices utilised and these include techniques such as similes, metaphors, symbols and imagery. Since the plays are rather symbolic plays, the details on symbols and motifs are especially lacking. Moreover, the texts are dramas, so there must be some inclusion of dramatic techniques such as flashbacks, asides and notably the use of deus ex machina in the case of Medea. More importantly, the writer needs to realize that while similarities need to be mentioned, the more subtle differences between these similarities should e mentioned to score in the range of 17-20 for the world literature commentary.

The use of grammar and vocabulary is satisfactory, but as mentioned above, the writer needs large improvements in the use of technical terms, especially those relating to literary devices and dramatic techniques. Overall, a good world literature commentary with rooms for improvement.