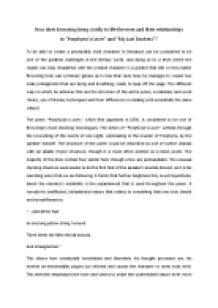 How does Browning bring vividly to life the men and their relationships in Porphyrias Lover and My Last Duchess?

﻿How does Browning bring vividly to life the men and their relationships in ?Porphyria?s Lover? and ?My Last Duchess?? To be able to create a perceptibly vivid character in literature can be considered to be one of the greatest challenges in the literary world, and doing so to a level where the reader can truly empathise with the created character is a greater feat still. In this matter Browning truly was a literary genius as in less than sixty lines he manages to create two male protagonists that are living and breathing, ready to leap off the page. The different ways in which he achieves this are the structure of the entire poem, vocabulary and word choice, use of literary techniques and their differences in dealing with essentially the same subject. The poem ?Porphyria?s Lover,? which first appeared in 1836, is considered to be one of Browning?s most shocking monologues. The action of ?Porphyria?s Lover? unfolds through the recounting of the events of one night, culminating in the murder of Porphyria, by the speaker himself. The structure of the poem could be described as one of twelve stanzas with an ababb rhyme structure, though it is most often printed as a block poem. The majority of the lines contain four iambic feet, though a few are pentasyllabic. ...read more.

would inevitably return and take her back from him, decides to save this moment of ecstatic love in one of the ways that occur to him- ? a thing to do?, he murders her. His belief is that if he preserves her in the one moment when she was only his and all of her other obligations were, if only for the meantime, forgotten, then he will have the ?Perfectly pure and good? woman that he wanted to see in her. This can be further seen when he describes her corpse, ?I warily oped her lids: again Laughed the blue eyes without a stain.? Here again he describes her corpse as not having any stain of the obligations that were keeping her away from him. Also, ?That all it scorned at once is fled,? further justifies that view. And then the last line ?And all night long we have not stirred, / And yet God has not said a word!? reveals his ultimate triumph yet at the same time a sort of tease, to us, the readers, and the entire Victorian society. Though that is probably the only time in the entire poem where we can actually feel the presence of the author?s opinions. It is an open challenge to the views of the society and its treatment of women. ...read more.

What he considered to be a simple mindedness and excessive amiability. It also seems as though a matter of life and death is a simple matter for him. He did not view the Duchess as a human being, she was just one more of his precious possessions that didn?t quiet correspond with his expectations, and so he had her removed. We can also see his need for complete control over a situation. He wasn?t able to conform her to his standards so he did it in a slightly more radical way, by eliminating her. In conclusion, there are many ways in which Browning vividly brings to life the men and their relationships in both ?Porphyria?s Lover? and ?My Last Duchess?. He does so through structure, revealing their states of mind, through vocabulary, revealing their tone and background, and through slow revelation of character, that builds up and up until all their efforts at concealment are swiped away and all that is left is the bare truth. The last one is what I believe to be the most important factor as it is what interests the leader most. First we get an almost accidental glimpse, then it becomes more and more clear until we have the feeling that we actually understand those characters. They are living people, made of bones and flesh, just as we are and they have opinions and faults and sometimes even virtues and that is what truly makes those characters so vivid, their humanity. ...read more.